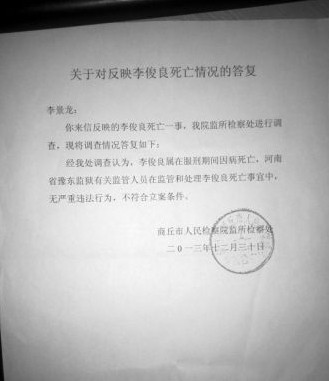 The Procuratorate Office of Shangqiu City Procuratorate replied that the relevant supervisors in Yudong Prison had "no serious violations" in this matter.Photo courtesy of the family of the deceased

After nearly 7 months of morgue in the funeral home, yesterday afternoon, the body of Li Junliang, a prisoner in the Yudong Prison in Henan Province, was forcibly cremated. Prior to this, Li's family members suspected the cause of his death and asked the prosecutors to open a case and access surveillance video, but they were rejected.

Li Junliang was born in 1970 in Yucheng County, Henan Province. In July 1998, he was sentenced to life imprisonment by the Intermediate Court of Shangqiu City for robbery, trafficking in women, rape and theft. If it were not for the sudden death in Yudong Prison serving his sentence on June 7, 2013, he would be released in more than 6 days.

Cao Lei, now released after serving his sentence, was in the same prison as Li Junliang.According to Cao Lei, Li Junliang suddenly fainted at around 9 o'clock that night, "I just saw him on the spot."Li was immediately taken to a small hospital in the prison for rescue.

About half an hour later, Li Junliang's family received a call from the prison and was told that he was seriously ill and 120 was being rescued. "After more than an hour, the prison called again, saying that my brother's rescue was ineffective." Li Junliang's younger sister Li Wenjuan said, and the other party told the family not to go to visit overnight.

The certificate issued by the Yudong Prison to the Shangqiu Funeral Home shows that Li Junliang's body was taken into the funeral home on the night of the incident. The staff of the funeral home told the Nandu reporter that the body of the deceased in Yudong Prison is generally cremated by the hall. Without the permission of the prison, the family of the deceased has no right to visit the body alone, let alone take it away.

Prosecutor: Does not meet the conditions for filing a case

But the staff member did not explain the legal basis for this practice.Li Wenjuan said that the family members once saw Li Junliang's body under the supervision of the prison. "The prison does not allow us to take photos and videos, and warns that if our family members dare to be disobedient, they will send armed police to deal with us."

Li Wenjuan described that Li Junliang's face turned blue, his body was basically normal, and there was a scratch on his forehead. The prison explained that it was caused by a fall when he became ill. "People with heart disease usually use electric shocks, but my brother has no traces of electric shocks on his chest." Li Wenjuan said.

After all the above requests were rejected, Li Junliang's family filed a complaint with the Procuratorate Office of the Shangqiu City Procuratorate, requesting that the matter be filed and the prison staff be held accountable. On December 2013, 12, the Procuratorate Office of Shangqiu City Procuratorate’s prison replied that after investigation, Li Junliang died of illness while serving his sentence, and the relevant supervisors in Yudong Prison “have no serious violations of the law and did not meet the conditions for filing a case”.

So far, the family members have only been verbally conveyed that Li Junliang is "sudden cardiac death" and have not received any documents about the cause of death.

Roommate: The deceased was once in a prison hospital

"The procuratorate doesn't care, we will investigate by ourselves." Li Wenjuan said, the family contacted the inmates who were released from prison before and after Li Junliang's incident and learned that Li Junliang had been hospitalized for heart disease and that the inmates in Yudong Prison worked more than 10 hours a day. There is a problem of overtime work.

At least four persons released after serving their sentences proved Li Wenjuan's statement to the Southern Metropolis reporter. Cao Lei, who was in the same cell with Li Junliang, said that before and after the Spring Festival last year, Li Junliang was hospitalized once in prison hospitals due to heart problems, and he participated in the care for the second time.

Zhu Liufu, who participated in the care of Li Junliang's first hospitalization, said that in January last year, Li Junliang was hospitalized with sinus bradycardia. At that time, his heart rate was only more than 1 times a minute. After staying in the hospital for four or five days, he was discharged after being relieved. "This kind of patient should be admitted to the old disabled team according to regulations, but the prison did not let him rest."

Wang Lixin, who used to be in the same sub-district with Li Junliang, said that he had assisted prison guards in taking care of inmates in the sub-district. “Generally, prisoners who are sick and not particularly urgent will not ask for leave, and generally will not approve them.” Li Junliang is the first. Wang Lixin was escorted by Wang Lixin.

"If my brother has been in the hospital and the prison is still allowed to do heavy work, there must be malfeasance; if my brother has a normal physical examination every year, why would he die suddenly?" Li Wenjuan questioned.

Xia Wenxiang, director of the Procuratorate Office of Shangqiu City Procuratorate, told reporters that according to his investigation, Li Junliang had indeed been hospitalized, but he was not a heart attack; Xia’s subordinate and deputy director of the Shangqiu City Procuratorate’s Prosecutor’s Office in Yudong Prison, Bao Changwei denied Xia According to the statement, Li Junliang has never been hospitalized during his sentence. The warden and office director of Yudong Prison declined to be interviewed.

Yesterday morning, Li Junliang’s family members went to Yudong Prison and funeral home separately to discuss the explanation. In the afternoon, Li Wenjuan received a notice that his brother's body had been cremated.