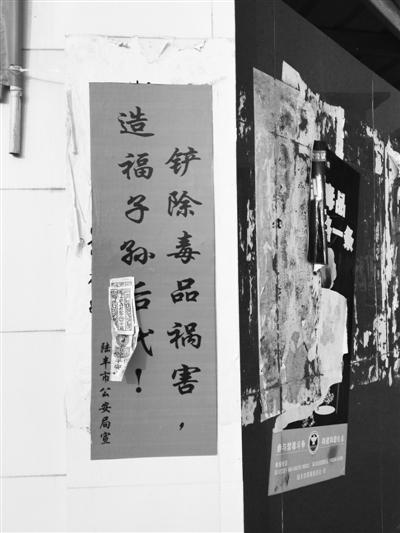 Anti-drug slogans can be seen everywhere in Boshe Village. A torn off notice on the wall of Boshe Village, the notice was about anti-drug propaganda.

In the early morning of December 2013, 12, more than 29 heavily armed police forces in Guangdong carried out a large-scale suppression of Boshe Village, knocked out 18 extra-large drug production and trafficking gangs, arrested nearly 200 people, and seized nearly 3 tons of methamphetamine and raw materials for drug production. Over a hundred tons. After Guangdong police notified the anti-drug operation, the "first drug village" became a national hot spot. On January 1, I went south from Beijing to this village less than 4 kilometers from the sea.

When the night fell quietly, in front of me, an outsider, Boshe Village presented a new face that was different from the day: under the big banyan tree with the incense burner at the entrance of the village, the white curtain for the play was set up early, the old man and the child Sitting under the banyan tree quietly watching the play. The sound of the play is hard to hear, because at this time, there is only one sound in the Boshe Village, and that is the roar of the diesel engine. This state has continued for many years in Boshe Village.

Affected by drug production, the village's electric wires were unlawfully connected and flooded. Villagers often cannot use electricity normally. Diesel generators have become a must for those living in this village. Traveling north and south over the past few years, the Boshe is the village with the worst wiring disorder I have ever seen.

In fact, the disorder of these infrastructures is just a microcosm of the chaotic management and the disorder at the grassroots level in this so-called "first drug village" and "drug production fortress village."

I am a foreign reporter, in this united, closed, and conservative village, how can I persuade the local villagers to open the conversation and tell the growth of the drug manufacturing village?

To be honest, the first time I entered the village, I felt a little nervous.

Of course, this is not simply because of the kind reminders from many local friends.

"You must be careful when you go in, and protect yourself." On the phone, a Western-America businessman who does business in Guangzhou warned me.

He said that Boshe Village is well-known for drug production in the local area, and some villagers still have guns. Even people from nearby villages are rarely willing to go in. Another police officer who once entered the village to enforce the law also said that the local people's customs is strong and violent resistance occurs from time to time. The police will also do multiple protections when entering the village.

I must admit that these kind reminders affected me. However, the set of data released by the police is what I really worry about-not personal safety, but the difficulty of the interview.

An official of the Guangdong Provincial Public Security Department said that 20% of the families in Boshe Village directly or indirectly participate in drug production and trafficking, and have formed a situation of "family operation, industrialized operation, and local protection". What is the concept of 20%? There are about 14000 people in the village. If the data provided by the police is true and accurate, then there are at least 2000 people involved in drugs in Boshe Village, and the police have arrested nearly 200 people. The village was not involved in drugs but due to various reasons (such as minor circumstances, insufficient evidence, etc.). How many villagers were taken away?

The whole village of Boshe is surnamed Cai. It is a traditional village dominated by a clan. People in the village are an ancestor regardless of blood relationship. Such a village is united, closed, and conservative. How can I, an outside reporter, persuade the local villagers to open the conversation and tell the growth of the drug manufacturing village?

The experience of Sijin Boshe since then has confirmed earlier concerns about the legend of the drug village.

The young man speeding by on a motorcycle, pointed at the camera and the photojournalist who took the picture, quickly stretched out his right hand and made a movement with his middle finger pointing upwards.

On January 1, I entered the village for the first time, accompanied by the staff of Lufeng's Propaganda Department.

In and out of Boshe Village, there are only 2 village roads, both of which are beside the highway from Jiaxi Town to Lufeng City. The closer you are to Boshe Village, the more anti-drug banners and slogans on the roadside.

In the office building of the People's Government of Jiaxi Town, the red banners raised at the front entrance raised the anti-drug to the height of the People's War. "The whole party is mobilized, the whole people are hands-on, and a people's war against drugs is launched!"

After passing through a section of cement road paved among lychee forests, Boshe Village entered the field of vision, and what you could see from a distance was the high-rise mansions under construction or already renovated.

Before entering the village, I asked about the background. Some villagers in Jiaxi Town ridiculed. Boshe Village is known as "Little Hong Kong" locally. Different from the common two-story villas, Boshe Village’s mansions range from three to four stories to five or six stories. The homeowner uses luxurious-looking materials to decorate the courtyard and windows with iron fences and anti-theft nets. These mansions are densely packed on both sides of the village road that runs from north to south.

In addition to the aforementioned chaotic power lines and many luxury houses, as far as I can see, the biggest feeling is that there are many motorcycles in the village. The hair-dying boys and the girls in stockings often drive through the village in groups.

On both sides of the village roads, in addition to anti-drug slogans and banners, notices from Lufeng City Public Security Bureau on severely cracking down on drug-related crimes were also posted. I saw that in the blind spots of some walls or surveillance probes, the anti-drug notices of the Public Security Bureau were torn beyond recognition. Some left a section of the notice header, and some only left some paste, indicating that anti-drug notices had been posted here.

The young man speeding by on a motorcycle, pointed at the camera and the photojournalist who took the picture, quickly stretched out his right hand and made a movement with his middle finger pointing upwards.

The hostility and unwelcome of foreign visitors to the village are the same feelings I have experienced during my four visits to the village. I walked along the village road and consulted the villagers in Mandarin. Regardless of the age of men and women, most of them waved their hands and pointed to their own mouths, meaning that they did not understand or speak Mandarin. Some villagers did not lift their heads and rolled their eyes.

I have been trying to explain this rejection with a clear sense of self-protection. Later, I finally asked Lao Cai, a villager who could speak Mandarin and was willing to communicate, and his views made me suddenly clear.