Want to come to Australia to dig for gold? First go to the gold mine in Victoria to explore the way‏

Today, I will introduce one of the main features of our one-day tour-Gold Mine City!

The Gold Mine City is located in the small town of Ballarat in the northwest of Melbourne. The site of Severeign Hill (Severeign Hill) is the gold mine city we are going to. Sovereign Hill is also known as the New Golden Mountain, and will be called the New Golden Mountain, relative to San Fransico in San Francisco in the United States. The gold rush in the United States occurred in 1848. After that, in 1851, the world returned to Australia, here in Sovereign Hill, where they found more and bigger gold mines than San Francisco, and suddenly a lot of gold rushed into it. Visitors, so it is called New Kingsoft. Sovereign Hill is one of the mines, and now it is also the largest outdoor gold mine museum in the world.

Our first stop is to visit the Gold Museum. Let us first understand the historical background of Ballarat and Sovereign Hill. Many living utensils used by residents during the gold rush era are exhibited here, as well as tools for working gold mining. From the printing machinery, daily necessities, to the tools for gold panning and chain gold, they all have a sense of the times, and they are all very well preserved. 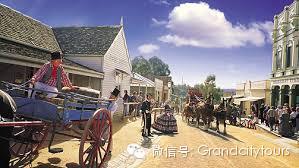 In addition, many photos from the time and local paintings are also kept, and the collection is very complete. Then there are also large-scale mining tools, partly displayed in the Gold Museum. As long as you press the button on the front, the machinery in front will simulate the state of operation, as well as the sound of the scene at that time, etc., just like visiting the 19th century. The scene is the same.

In the Gold Museum, of course, there are also a lot of gold mines unearthed in the local area. Large and small, all are magnificent and magnificent, like golden corals on land, gleaming in the dim exhibition hall. The gold ore unearthed here is as high as 99.9 purity. In addition to being the largest outdoor museum in Sovereign Hill, his gold museum is also one of the world's largest gold coin museums, with a very large collection and excellent preservation. There were also demonstrations of how gold coins were made, a brief history of gold coins, documentaries, and so on. For those with hobbies in collecting, you can feast your eyes here.

After the baptism of the Gold Museum, we have some basic understanding of the history of gold and Ballarat. Next we are going to enter the world’s largest outdoor gold museum. As soon as we step into the entrance of the park, we feel as if we have passed through a time tunnel and entered Ballarat, which was developed by the gold craze in the 19th century. At the entrance, we can feel the atmosphere of the 19th century. The staff here are all dressed in clothes of the time, and all the decorations and furnishings are rebuilt according to the design of the time.

What kind of woman can conquer the three most powerful men in the world at the same time? ‏