See what you are making! [Anti-Chinese Invasion of the Housing Market Cancelled] Organizer Suspected of Being Troubled by Personal Attack

On Thursday, this newspaper reported that Nick Folkes, chairman of the informal party "Party for Freedom" (Party for Freedom), launched a campaign called "Anti-Chinese Invasion of the Housing Market" on Facebook. Protested in front of the Chinese Consulate in Sydney this Saturday.

As of Thursday, this event has gathered nearly 1000 people to participate, and it has become the focus of Australian English and Chinese media. But on Thursday night, Fox suddenly cancelled the parade without giving any explanation.

Although the specific reason is not known, it can be seen from Fox’s Facebook page that this controversial activity has drew personal attacks from many netizens. Some netizens used the built-in real-time communication function iMessage of Apple mobile phones to Very rude words "greet" his mother.

On Thursday, the "Sydney Morning Herald" reported that Fox had delivered an inflammatory "Protest against Chinese Invasion of the Housing Market" flyers to the mailboxes of residents in the Lower North Shore, Inner West and Inner City of Sydney, and produced an interview video titled "The man behind the anti-chinese flyer".

But Fox believes that the outside world regards his actions as "anti-China", which distorted his original intention.

On Friday, Fox posted a link to this video report on Facebook, expressing dissatisfaction with the newspaper's claim that he was "anti-China." Fox commented: "Sydney Morning Herald Domain column. Those terrible'racist' words are here again! When will the left-wing media stop making up'racism'? The real victims are those who are Foreign owners are squeezing out Australian families from the local housing market at high prices." 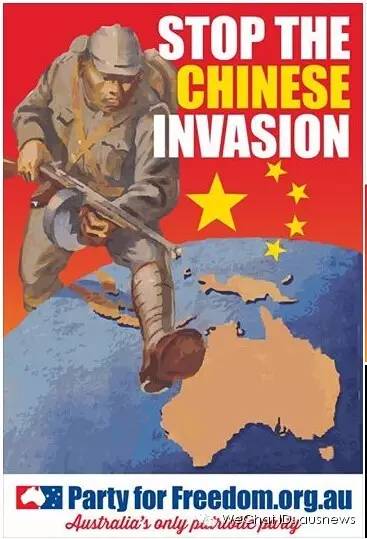 The picture shows the promotional poster produced by Fox before

Residents of the Lower North Shore of Sydney were frightened by the anti-China flyers that recently appeared in their mailboxes. These flyers condemned Chinese property buyers for pushing up housing prices, carrying out “ethnic cleansing” in the communities where Australian families live, and creating new ones. "The stolen generation".

The leaflets were distributed near Lane Cove on Monday and Tuesday. A resident said that the stern language of the leaflets was no different from "Nazi propaganda." 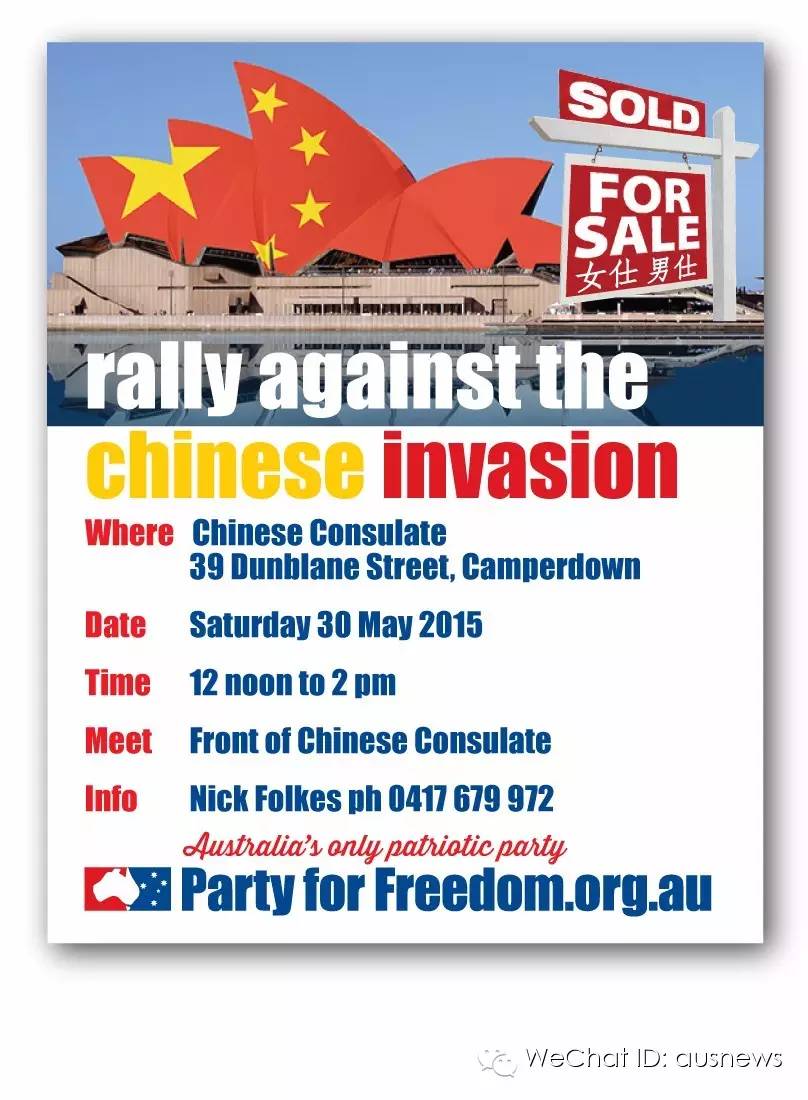 The mayor of Lane Cove, David Brooks-Horn, described the wording on the flyer as "unacceptable."

"I am shocked that our community members received such inflammatory substances in their mailboxes," he said.

"The things written above are clearly splitting society and do not conform to the strong sense of social responsibility of our Lane Cove community."

"For the Liberal Party" chairman Nick Folkes confirmed that he had printed 5000 pamphlets and distributed them throughout the Lower North Shore, the Inner West District and the inner city. These brochures stated that “greedy foreign invaders” were “crowding locals out of the market” and warned that “if the current situation of aggression continues, within the next 30 years, Australia will become a native country. Minorities".

Fox said that his flyer was not meant to offend anyone, but just to draw attention to foreign investment in Australia.

Fox's mother is a Russian refugee, and he said he is not anti-China.

"The response to these flyers has been mixed," he said. "There are surprisingly many Chinese saying'you are racist'. But I wrote very clearly that we are talking about Chinese, not Chinese Australians. "

The Liberal Party has not registered with the Australian Election Commission, but Fox hopes to gather enough supporters to register before the next federal election.

A spokesperson for the NSW Police confirmed that they were aware of the plan for the march.

Then Nick Folkes, chairman of the "Party for Freedom" (Party for Freedom), united with 5 people to launch a "Rally against the Chinese real estate invasion" campaign on Facebook. The original plan was to hold a protest at the gate of the Chinese Consulate in Sydney from 5 noon to 30 pm on Saturday, May 12.

As of 3 pm on Thursday, the number of people who signed up on this Facebook page has reached 859, and 58 people have indicated that they may participate.

The organizers of the parade also took a video of the burning of the Chinese flag and the flags of the Green Party, the Coalition Party and the Labor Party, as well as the photos of Prime Minister Albert and the Governor of New South Wales Baird, and uploaded it to Youtube, calling on the public to participate in the parade against the Chinese. The act of buying real estate in Australia. However, this behavior aroused the disgust of many netizens. Netizen SK Zhang said in a message: “Protesting in front of the Chinese consulate can force the Australian government to take action? You keep talking about treason and launching war in the name of the people, but the general public does not want to Let you represent them by burning the Chinese flag." 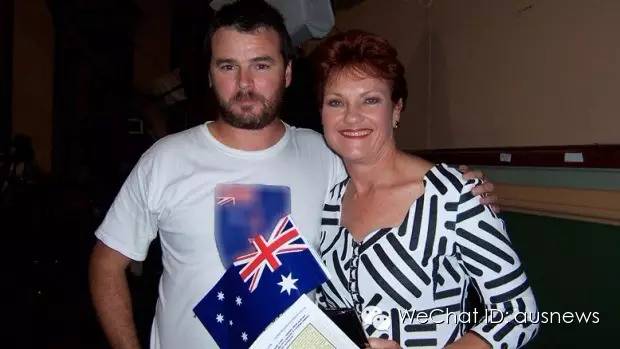 The following paragraphs are excerpted from the Facebook page of the event and do not represent our position:

"Greedy foreign investors are invading Australia. They snapped up real estate in Australia at lightning speed, driving up house prices and squeezing locals out of the market. Australian working-class people have been pushed to the fringes of cities, and foreign invaders The authors are harvesting the hard work of previous generations of Australians. The skyrocketing housing prices in Sydney and Melbourne have crushed the dream of young families to buy a house, which has become more and more a luxury for them. The new shellless snails, or those The forgotten people will one day go down in history as the'stolen generation', and it is the Chinese invaders who colonized our suburbs and cities that squeezed them out of the market."

"In communities that were once considered safe and cohesive, Australians are beginning to feel alienated and isolated. Not only are Australians being squeezed out of the housing market and becoming a'stolen generation', but our families and children also feel lost. Identity and community."

"The'Australian Dream' has been shattered. The government, foreign speculators and invaders are colluding with each other and are carrying out ethnic cleansing of the suburbs where Australian families are located. Many of these hard-working families have now had to be trapped in the vicious circle of renting a house. Almost unable to pay excessive rents to compete with foreign invaders."

"In the past ten years, the Chinese-born population in Australia has more than doubled. The impact on housing, employment and school enrollment is obvious. Chinese immigrants have created a parallel society because they like to live in Chinese settlements. Created a settlement that is isolated from other races. More and more Chinese have become Chinese-speaking real estate agents. They like to violate Australia’s foreign investment regulations and are greedy and ambitious."

In the face of provocative language, many netizens still do not buy it. Netizen Harry Minor mocked: "Easier way: you just take out all the deposits in the bank and leave it at home. Don't buy anything made in China. Just buy domestic products, support the community, and educate the next generation. Follow your example, then in 50 years, this shit-like situation may change."

Netizen Chen Tian said rationally: "Perhaps the best way is to report to the Australian government, because they make laws on foreign investment, and the Chinese consulate really can't help."

Here, kneel down! Beautiful! I have never seen such a beautiful cloud in my life!