At the NAFSA conference, the world's largest annual education event, Human Education released the "2015 White Paper on the Status of Chinese Students Studying in the United States" (hereinafter referred to as the white paper).

As the world's first data report focusing on expelled international students, after the white paper was released, public opinion was in an uproar.

Compared with the huge number of students studying in the US of 27 last year, it does not seem to be high. However, the actual situation reflected by these figures is far more serious than people think.

It is particularly noteworthy that expulsion due to academic dishonesty and misconduct has an increasing trend. Not all the "poor students" were expelled. More than 100% of the students from the top 60 universities were expelled. The dozens of expelled students included in the data even came from Ivy League universities. Science and engineering majors, economics and business management majors, large state universities, and young international students have all become the hardest hit areas. 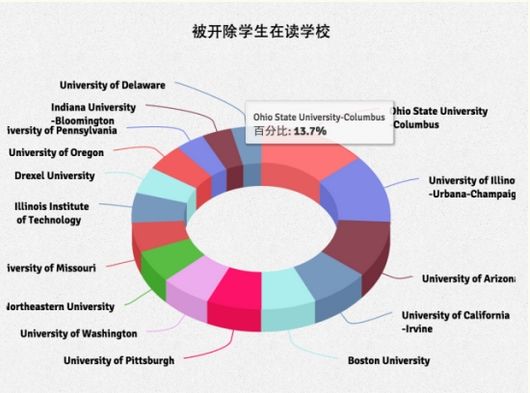 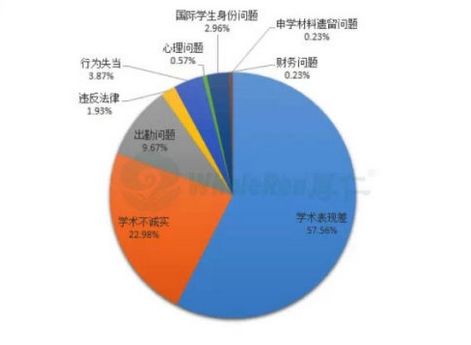 Reasons for expulsion and percentage 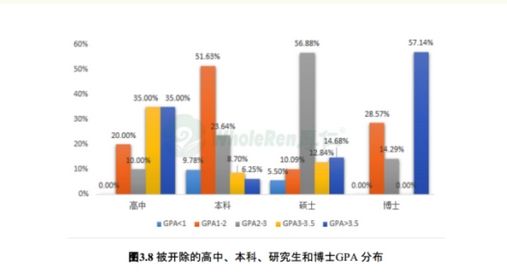 The white paper shows that among the expelled students included in the data in recent years:

12.1% from the University of Illinois at Urbana-Champaign (UIUC)

10.0% from the University of Arizona

7.4% from the University of California, Irvine

"The geographical distribution, subjects, and degrees of expelled students are similar to the latest digital trends released by the U.S. Immigration Service and the U.S. Open Door Report in 2015. The number of expelled students contacted by Horen is the largest in the industry, and Representative."

According to the statistics of the white paper, the expelled Chinese students were mainly concentrated in California, New York, Pennsylvania, Ohio, Illinois, and Massachusetts.

Chen Hang told the "Study Abroad" magazine that if a student is expelled from the school, the school has the responsibility to actively report to the Immigration Bureau, and the student's US residence status (F-1) issued by the school is invalidated. In this way, the student loses his legal residency in the United States. Students must leave the country within 15 days. Otherwise, the student may be refused entry for a period of three to five years, and it will also affect the entry of the student’s family, that is to say, both lose their student status and become illegal residents.

Main reason for expulsion: more than XNUMX% of academically failing

According to Hunren statistics, the reasons for expulsion are mainly classified into 9 types:

Issues left over from application materials (0.23%) Among them, academic issues such as low GPA or cheating are the main reasons for the expulsion of students.

Each school has different minimum GPA requirements for students. Chen Hang said that under normal circumstances, undergraduates need a 2.0 GPA and graduate students need a 3.0 GPA to successfully register for the next semester and complete their studies. If the student does not meet the required GPA, the school will give a warning to notify the student that the GPA is in the high-risk section of expulsion. If the student still fails to meet the required GPA in the next semester, they will be expelled.

Chen Hang analyzed that too much pursuit of grades or lack of confidence in their own learning abilities drove these good students to make wrong decisions. Many students were also punished for copying homework for others, and some of them "can't help but match their answers with their neighbors during the exam."

However, some students who were expelled for plagiarism felt very "unjust": many students were regarded as plagiarism by professors because of "inappropriate references". In addition, short-sighted behaviors such as taking exams/classes, falsifying grades, wanting to change grades and being reported, keeping previous exam papers, lying to teachers, forging tutor’s signatures, etc. are often expelled once discovered.

The 2015 white paper added a gender analysis dimension. In the sample population of the current survey of Chinese students studying in the United States, 61.6% of the expelled boys and 38.4% of the girls, that is, the ratio of male to female is about 6:4. It is worth noting that among the high-risk groups, there are obviously more girls over the age of 25 than boys. The rate of academic dishonesty among girls is nearly 10% higher than that of boys, and the corresponding rate of poor academic performance is nearly 10% lower.

Prestigious public schools are hardest hit, and science and business subjects are more likely to be expelled

Are students in prestigious schools relatively safer? The facts are just the opposite. Among the expelled students surveyed, more than half (62.89%) of the students came from the top 100 schools in USNews.

Specifically, more than one-third of the expelled graduate students came from the top 50 universities in the United States, with the highest proportion of economic and business management students; more than one-third of the expelled undergraduate students came from schools ranked 51-100 in the United States. Nearly 40% of students face expulsion in their freshman year, with the highest proportion of science and engineering students. Among them, 72% of the expelled comprehensive university students came from public universities. In terms of majors, among the students who were expelled, students majoring in science and engineering and majoring in economics and business management accounted for almost one-third each, 35.02% and 31.77% respectively. The reasons for being expelled were usually poor academic performance and academic dishonesty.

Why did TOP100 famous schools and popular majors become the hardest hit areas for expulsion? Chen Hang analyzed the "Study Abroad" magazine and said that Chinese students and their parents attach too much importance to rankings. In order to enter a school with a higher comprehensive ranking, they do not hesitate to change majors, regardless of the students' real interests. After students enter the popular majors of "prestigious schools" in the United States, they often slack off or do not understand, their psychological adjustment ability is poor, their interest is low, and it is naturally difficult to reach the standard.

Some of the expelled students said that they were not interested in the current major, and they applied only because they were persuaded by the intermediary that this major was easier to admit. This also confirmed Chen Hang's statement.

The white paper made a special analysis for the young international students. The report mentioned that there were 18 Chinese young students expelled from the school between the ages of 21-795, and a considerable part of their expulsion was due to misconduct and violation of the law.

Young international students are prone to cause many problems because of their young age and poor self-care and self-control ability. Fighting, making troubles, staying overnight outside the school, etc. are all problems that elementary international students come to the United States for first time and are not familiar with school regulations and humanities knowledge.

Each school defines inappropriate behavior. Generally, middle schools have clear requirements for behavior. Using insulting language in the classroom to swear or hit people is a violation of school rules, and serious ones may even be taken away by school police. In some strict boarding high schools, students who do not bring ID cards will be deducted.

Many scholars mentioned that the unfamiliarness of studying and living in the United States is likely to cause all kinds of unsuitability for newcomers.

For example, some Chinese students have developed the habit of raising their hands in speeches due to the influence of Chinese cultural traditions and education since childhood. At the same time, American students were encouraged to speak actively from an early age without raising their hands. In this way, when the Chinese students are still struggling whether to raise their hands or not, the American students may have said what they were going to say. If things go on like this, teachers will have some prejudices. These prejudices may eventually become discrimination against the learning ability of Chinese students.

A similar cultural shock may leave a long-term psychological shadow on freshmen, leading to serious psychological problems such as autism, low self-esteem, and social phobia. For new students studying abroad, the help of education professionals and psychological counselors is particularly important.

Damn, just do this and buy a car and a house! Demystifying what the "underground sperm donation man" is up to‏