day! Emotional robots are also out! Jack Ma's first entry into the field of artificial intelligence

Today, the Trinity of Softbank, Foxconn, and Ali launched the emotional robot Pepper in Japan, which shocked us. The first is its price. The Nao robot of Aldebaran, a French humanoid robot company, often appears at various robot conferences, and the price is about 10 yuan, so it is still far away to enter the life of the masses. However, the price of the XNUMX yuan robot Pepper has dropped by an order of magnitude, and Sun Zhengyi of Softbank found two powerful booster rockets for the XNUMX yuan "Astro Boy". One is Foxconn, which has ambitions to expand the field of robotics, and the other is the king of e-commerce-Alibaba.
Alibaba’s previous explorations in the field of artificial intelligence include the establishment of a data research institute and seeking R&D partners in American universities, but they have not yet taken a clear strategic direction. The investment in Softbank's emotional robot Pepper can be regarded as a test of Alibaba in the field of robot ontology. Although Alibaba's stake in SBRH is only 20%, the future progress of emotional robots in the fields of service robot manufacturing, circulation, and human-computer interaction cannot be underestimated.
Now that there are emotional robots to explore the way, Alibaba's future three-dimensional layout in the field of artificial intelligence is more worthy of attention. It is said that Baidu will also launch service robots this year. By then, BAT's robots may have their own magical powers, and the overall development level of artificial intelligence will also reach a new level. Let us continue to pay attention to the intelligent revolution brought about by the world's first emotional robot, and look forward to the forthcoming of the fourth human revolution claimed by Jack Ma.
Softbank, Foxconn, Ali: Trinity launches emotional robots

On June 6, at the launch of the world’s first emotional robot, Pepper, held in Tokyo, Japan, Alibaba’s Chairman Jack Ma predicted that “the robot industry will develop by leaps and bounds within 18 years.” He said, “The future of robots will be like cars. , Planes are as popular, they will become a member of our family."

Alibaba and Foxconn jointly announced in Japan that they will strategically inject 145 billion yen (approximately 7.32 million yuan) into the robotics company SBRH under SoftBank of Japan, each holding 20% ​​of its shares, and SoftBank holds 60 shares. %.

Foxconn’s development of robots has long been well known, and the purpose is to replace labor and save costs.This is the first time Alibaba has invested in robotics. 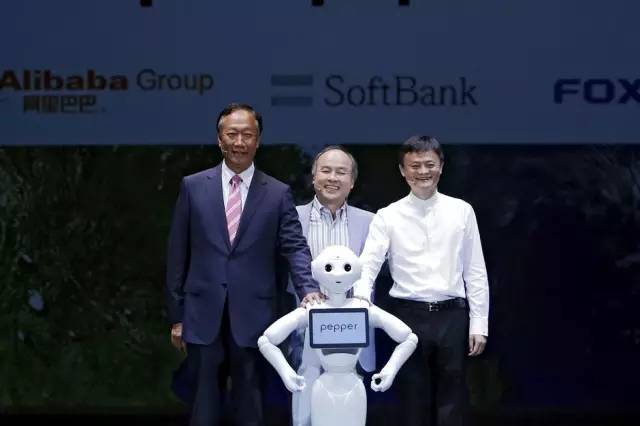 SoftBank Robotics Holdings Corp. (SoftBank Robotics Holdings Corp., hereinafter referred to as "SBRH") produced the robot Pepper, the world’s first robot product with emotions. According to SoftBank Chairman Sun Zhengyi recalled at the scene, he was five or six years old. When watching the cartoon "Astro Boy", I hope to give the robot a heart full of emotions.
Sun Zhengyi said at the time: "When it comes to robots, people always think that robots have no expressions and no heart. (The appearance of Pepper is) for the first time in human history, let robots have heart and expression." This robot uses cloud computing technology. To process the data, so that he has his own expression function, and Sun Zhengyi promised not to disclose personal information at the press conference. Japan is one of the fastest aging countries in the world, which is a major problem that plagues the Japanese government. The government hopes that companies can use robots to reduce their dependence on labor.

Ma Yun also referred to the practice of giving Pepper emotions as the "Fourth Industrial Revolution." "Before we only thought that robots have better memory than humans and will not be fatigued. But Pepper has emotions, and Pepper can also let us understand ourselves better. Inner world.
Foxconn Technology Group founder and president Guo Taiming pointed out: "Foxconn is very pleased to cooperate with SoftBank and Alibaba this time to work together to promote robotics to take a big step forward. Robots are the focus of Foxconn's strategic development, and we will save and improve intelligent manufacturing. Technology, fully implement the vision of Industry 4.0."

The cooperation of SoftBank+Ali+Foxconn revealed when Ma Yun and Guo Taiming appeared in Taiwan at the same place in March this year. On March 3, Jack Ma gave a speech at National Taiwan University. Hon Hai Chairman Guo Taiming sat in the first row to listen. According to Taiwan media reports at the time, Guo Taiming agreed with Ma Yun's statement that entrepreneurship requires persistence, enthusiasm, and resistance to setbacks. He also revealed that he would cooperate with Japan's SoftBank and Ali for a series of related products such as the robot pepper and sell them all over the world. ——Know that Pepper's manufacturing base is in Foxconn.

SoftBank sold 2015 humanoid robots "Pepper" to developers at a price of 2 yen (approximately 19.8 yuan) in February 1, and plans to start in the summer of 300 to approximately 2015 in Japan Chain mobile phone stores and online sell Pepper to ordinary consumers, and it is estimated that the monthly output will reach 2700 to 1000 units. In developed countries, the popularity of smartphones and tablet computers is coming to an end. As the next growth area, global high-tech companies are accelerating their investment in humanoid robots. However, the current production cost of robots is too high, which has become a bottleneck for popularization. Some analysts say that this tripartite cooperation is expected to build a system that can be mass-produced at low prices.

It is reported that Alibaba, SoftBank and Foxconn, three world-renowned companies, will jointly promote the global development and expansion of the robotics industry in the future. In addition to Japan, SoftBank is also considering overseas sales to China and the United States. Looking for partners who can not only help in capital but also in business is of course Sun Zhengyi's first choice in financing objects, and Ali and Foxconn are obviously very suitable.

The origin of the world's first emotional robot Pepper

All this goes back to the French humanoid robot company Aldebaran (Aldebaran, the brightest Taurus) founded in 2005. In 2008, Aldebaran's robot "NAO" successfully replaced Sony's famous AIBO robot dog and became the standard alliance platform of "RoboCup Soccer", which attracted the attention of the world.

In 2014, SoftBank acquired and invested in a number of robotics-related companies, involving expression cloud and expression sensing technology.

The Pepper robot is 1.2 meters tall and weighs 28 kilograms. It is equipped with a 10.1-inch touch screen on its chest. It has a lithium battery life of more than 12 hours. It has sold 300 units (all development machines).

SoftBank is also working with IBM's Watson to teach Pepper how to understand the meaning and context of languages ​​such as English and Japanese. This skill should help Pepper answer questions more effectively.

When the robot was released last year, the inventor Aldebaran Robotics stated that this is the first robot that can live with humans. It can modify its language or change its posture according to the situation. If you want to experience this robot first, you can go to Japan's Softbank mobile phone store to interact with it. The Pepper robot was designed and developed by French company Aldebaran and manufactured by Hon Hai Precision in Taiwan.

Pepper is mainly used in the service industry, involving store reception, restaurant services, home care, medical rehabilitation, etc., which is more in line with people's fantasy robots. Softbank also officially announced that Pepper robots will use this cooperation to put into mass production, and formally put into the consumer market, the first batch of 1000 will be sold on June 6. Pepper is scheduled to go on sale in Japan at the end of June, priced at 20 yen (about 6 yuan) each. Nihon Keizai Shimbun stated that the joint venture will mass produce 19.8 units per year in 1.

Through Alibaba, Pepper is expected to enter China's listing, but Ali said that the specific listing time and price have not yet been determined.

Jack Ma: Robots with emotions will be the fourth human revolution

Jack Ma said frankly that he had discussed many issues related to "robots" with Sun Zhengyi, Chairman and President of SoftBank Group for a long time. Will robots take people's jobs? Can robots commit crimes? Jack Ma believes that despite such concerns, it is undeniable that robots will be as popular as cars and airplanes in the future, and robots will become a member of our family, so we have to make preparations and layouts from now on.

In Jack Ma's view, "We are moving from the IT era with control as the starting point to the DT (Data Technology) data era with the purpose of activating productivity." The key to this transformation process depends on big data and cloud services. Alibaba has huge advantages in cloud computing and big data, which will provide strong support for the research and development of smart products and robots.

Ma Yun believes that robots in the future will become smarter and may even have the ability of "human" perception, thinking and intelligence. In the future, the robotics industry is expected to become a key area to catalyze technological breakthroughs in medical, public services, research, and smart homes. The widespread application of robots will bring new changes to the industrial structure, way of thinking and social inventions.

The following is a partial record of Jack Ma's speech:

Jack Ma: Thank you. I am very happy to see Pepper like this. I am very excited when I sit there. I asked President Sun, what should I say? He said you can say anything. We saw Pepper for the first time last year, and a year later, this year is really fast, which is also very gratifying.

If we have concerns about the future, we must prepare now. Whether you like this robot or not? Just like a car, it is a machine, just like an airplane. It may become very popular in the future and become a member of the family, and it will play a very important role. In 30 years, this industry will be further developed by leaps and bounds. Every generation of technology is constantly improving. For example, a hundred years ago, there was the second industrial revolution. Many of them were not made by people, but by machines.

After the second industrial revolution, higher technologies were produced, as well as the energy revolution. Now automobiles, ships, airplanes, and various resources have been born.

What do people do? People have hearts and emotions. President Sun is very courageous in giving people’s feelings and a heart to Pepper. This is a very brave challenge. I think this is the fourth human revolution. His mind and human feet finally gave this heart to the robot.

We are also very much looking forward to working with Hon Hai Group and SoftBank to further improve this technology. For our better future, robots will become part of our lives whether we like them or not. , The future is like this.

We have now made such preparations. I hope that the three of us can join hands and go to the world. I am very happy.

Hot || Rape is justified? The court talks about the sentence of life imprisonment for the man who killed the rapist.‏

The China-Australia Free Trade Agreement spreads flowers to all people! Only these 3 kinds of people cry