Little devil! After drinking, Abe revealed that Japan is preparing to fight China, and blames Japan and South Korea

"The security bill is formulated for China." "We want to beat China in the South China Sea with the United States."... Recently, several Japanese weekly magazines and websites frequently broke some shocking remarks by Prime Minister Shinzo Abe. Regarding the above remarks, the Prime Minister’s residence repeatedly threatened the media not to disclose it. Some reporters were unable to publish relevant reports in their own newspapers, and instead disclosed the information to weekly magazines and websites. 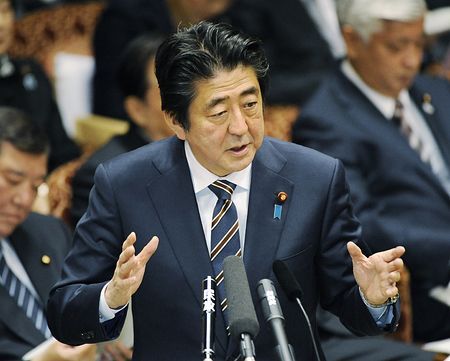 The latest issue of the Japanese magazine "Weekly Hyundai" broke the news that in early June, Japanese Prime Minister Abe and various media leaders held a "friendship meeting" at the "Akasaka Hotel", a high-end Chinese restaurant in Tokyo. According to the magazine, after drinking his glass of red wine at the "friendship meeting" that day, Abe began to speak out in a row.

When talking about congressional debates and topics related to the security bill, Abe started the model of "imposing his own doctrines on the people around him" and vigorously criticized the representative of the Democratic Party of Japan's opposition Katsuya Okada, saying that he "always speaks meaningless nonsense". The Democratic Party is going to die." Wait. When talking about the right to collective self-defense, Abe went so far as to say: "The Security Act is aimed at China in the South China Sea. So if it says to do (referring to passing the security bill), then it must be done. In front of the media, Abe admitted "openly" that he was indeed planning a war with China. Abe also stated that he would exercise the right of collective self-defense and work with the US military to "beat China in the South China Sea."

In addition to blatantly pointing at China, Abe is also full of complaints about the United States and its president. Japan’s LITERA website stated that on the 16th when the US Congress and the Obama administration were at odds and opposed the bills related to the TPP agreement, Abe was very angry and said, “I don’t know.美国What are you doing,ObamaWhat are you doing! "In addition, on the occasion of the 50th anniversary of the normalization of diplomatic relations between Japan and South Korea, the foreign ministers of Japan and South Korea will hold talks. Abe said, "I said, wait a minute, and South Korea will come by itself." He also claimed that "comfort women" The problem can be solved with only 3 million yen."

These very "impact" conversations of Abe were required to "not record publicly." The Japanese media "Weekly Post" recently published a special report of the Prime Minister's residence on the suppression of major Japanese media, pointing out that the Prime Minister's residence has long been monitoring and intimidating the Japanese Press Club. They told reporters present at the "Enjoy the Protest": "If the news is leaked, I don't know what the consequences will be."

According to a report on the 27th, Wang Yi stated that according to traditional international law, China has sufficient legal principles and factual basis for the sovereignty of the Nansha Islands. “China was a maritime power more than 1000 years ago. Of course, it was the first to discover, use and administer the Nansha Islands. country".

According to the report, Wang Yi emphasized that during World War II, Japan invaded and occupied the Nansha Islands. After the end of World War II, the Chinese government in accordance with a series of international conventions and agreements, including the Cairo Declaration and the Potsdam Proclamation, regained the Nansha Islands in accordance with the law and publicly. China and the United States were allies at the time, "Chinese personnel used to take American warships to recover the Nansha Islands." After the discovery of oil in the South China Sea in the 20s, some countries began to illegally occupy and encroach on the reefs of the South China Sea. Therefore, "China is actually the biggest victim of this problem. " Approximately XNUMX Japanese people surrounded the Japanese Diet on the XNUMXth, opposed the security bill passed by the Abe regime, and strongly urged the Abe government to step down.

In the slogans held by the protesters, Prime Minister Shinzo Abe sometimes incarnates as a Nazi, saying that he will "take back the Japan that fought the war." Sometimes he incarnates as an old Japanese soldier, stepping on the Constitution and holding a bayonet. The protesters repeatedly shouted in unison, "Oppose the International War Support Act," "Immediately End the War Act," "Prevent the Abe regime's brutality", and expressed strong opposition and dissatisfaction to the Congress and the Prime Minister's residence. 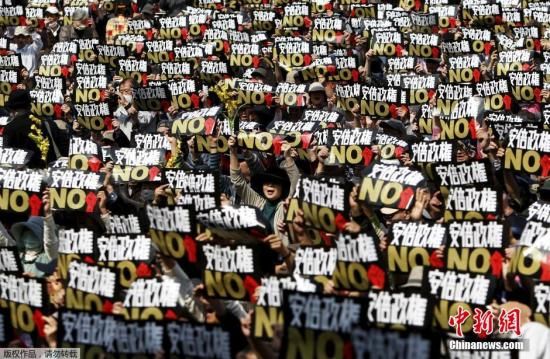 Representative of the Democratic Party, Katsuya Okada, the largest opposition party, said that the Security Act allows Japan to exercise the right of collective self-defense, which is inconsistent with the Japanese Constitution and "unconstitutional." Okada further pointed out that according to Abe's approach, the future Japanese government and leaders can even implement the "conscription system" that is also prohibited by the constitution by modifying the interpretation of the constitution.

The Chairman of the Communist Party of Japan, Shige Kazuo, said that Abe said that the "logistics support" for foreign troops in the Security Act would not constitute the joint exercise of force with other countries. However, in the international military common sense, the logistics support itself is part of the battle. Abe called "logistics support". The statement limited to the safe zone is "unrealistic, irrational, and illogical."

A series of actions by the Abe administration aimed at unwinding the overseas military operations of the Self-Defense Forces have aroused strong public opinion and concerns. Yoshio Yamashita, secretary of the Communist Party of Japan, believes that this is a major change in the security policy that allows Japan to fight overseas."War Legislation", Is the destruction of the Japanese Constitution. The head of the Social Democratic Party, Yoshida Tadatomo criticized that it was clearly a war bill, but it was named "peace". This was deceiving the people.

So angry! It is the unqualified domestic milk powder. The brand batches are here. Expose...