Secretly crossing Chencang | Longing on the surface and shorting behind Guotai Junan is the driving force behind the stock market crash? ‏

Recently, some media reported that "Before Guotai Junan went public, betting on empty bills to make money on the Internet and spreading that its employees "spread rumors" stamp duty?" This article was widely circulated on WeChat and other self-media; relevant people in Guotai Junan said that the company is investigating the matter.

According to the “Daily Business News” report, Guotai Junan, which was previously ranked third in the short stock market and futures market, suddenly increased the selling order of the main contract IF15 on the 1506th, increasing the selling order to 1.12 lots, an increase of 4330 compared to the previous trading day. hand. On the 16th, the four stock index futures contracts fell sharply across the board, of which the main contract IF1506 fell 3.06%. The data on the 16th showed that Guotai Junan's seat made a profit of 1311 hands on that day.

After the stock market fell sharply, someone posted on Tao Stock Bar, “Xu Shanwu, general manager of the Yangzhou Sales Department of Guotai Junan, declared on the Internet on the 16th that the regulator would announce the increase in stamp duty that night.” Accordingly, investors believe that this behavior has been a rumor.

On the surface, Guotai Junan is still singing a lot: "The main reason for the market decline in the last two days is short-term liquidity pressure. The current market is a new buying point to continue to enter the market. The market adjusts too quickly in the short term to form a rare investment opportunity. The bull market is expected to drive. Funds will repair the decline process faster, and the timing will appear in the next few days. Firmly look at A shares, the process of rising market risk appetite has not been broken, and grow more."

Some netizens scolded in a post: it's shameless to sing too much on the surface and empty behind. 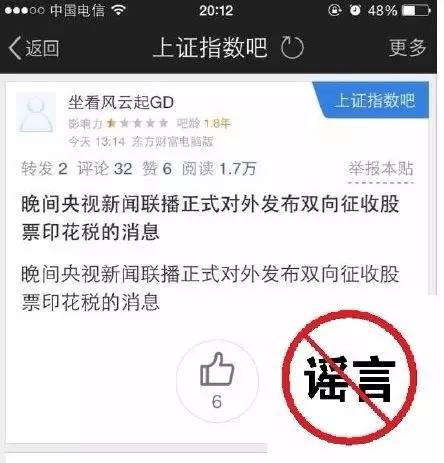 Many days ago, it was rumored that Cathay Pacific was shorting

At the same time, investors vented their anger towards Guotai Junan in the stock bar. Many investors believe that Guotai Junan’s issuance price is too high and appeals to investors not to buy vampire stocks; some investors say it may become the first new stock to break in the near future. Some people are even more worried that Guotai Junan, like PetroChina back then, the stock market will turn down after listing.

Public information shows that 6 new shares will be issued on the three trading days of June 17-19 and on the 23rd. According to statistics from Guotai Junan Securities, the total amount of funds to be raised from the 25 new shares is 25 billion yuan, which is a significant increase of 416 billion yuan from the first batch of IPOs in June. It is expected that the frozen funds of a single new share will exceed 6 trillion yuan. The original IPO is expected to freeze funds at 187 yuan. 3 million, the amount of funds to be raised and frozen both hit a record high. Among them, the "Big Mac" Guotai Junan Securities IPO, raised funds reached 7.1 billion yuan, and the frozen funds of a single new stock exceeded 301 trillion.

Cathay Pacific is the dead star?

The unrest in the market is not only caused by Guotai Junan, but the issuance of new shares is indeed facing a "wolf coming" pattern. On the one hand, the high valuation caused by the rush of new stock listings, and the return of overseas listed Chinese concept stocks, the Shanghai Stock Exchange is actively preparing for the strategic emerging industry board, and the Shenzhen Stock Exchange has promoted the listing of unprofitable Internet companies. These all aggravate market concerns.

The market is also worried that Cathay Pacific's listing will become PetroChina's second place, a sign that the market has peaked. The issuance of PetroChina in October 2007 announced the end of the bull market at that time. Will this bull market follow in the footsteps?

Is the bubble going to burst? ! The chairman of the major banks in Australia has bought low prices and high prices to cash out...‏