The French media are in a stir! The 37-year-old young minister and his 20-year-old wife appear to kill France

On the evening of June 6nd, the French Minister of Economy, Mrs. Mackronker, came to the Elysee Palace for a banquet, which caused great turmoil in the French media.

This is the 37-year-old Macron’s first appearance in public with his 20-year-old wife. The French media exclaimed that Mrs. Macron "finally revealed the mystery" and even said that the couple’s appearance was more than that of the Spanish kings and couples. "More precious". On the evening of June 6, local time, French President Hollande hosted a banquet in the Elysee Palace to receive the King of Spain, Princess Philippe. As the French Minister of Economy, Mrs. Marcon and his wife Brigitte Trogne attended the dinner together.

Not only in France, but even in the world, the Micronaires are not considered as traditional couples. So when this couple appeared, they attracted great attention from the French media. What's more, this was the first time that Micronaire was older than him. The 20-year-old wife appeared in public.

The French "Viewpoint" magazine said that it was a surprise for Macron to attend the banquet with his wife. That night, Macron was dressed in a dark suit, while "Mrs. Mystery" Trogne was wearing a sleeveless black dress and red high heels. Although he was 57 years old, his figure was still very good. The two were on the red carpet. It's like a star at the Cannes Film Festival along the way.

Trogne, who appeared in public for the first time, was always smiling that night, looking very kind and easy-going. The close interaction between her and her husband also made everyone at the dinner feel the tenderness and affection between the two. Some French netizens even ridiculed: "How can Hollande's affection so much?" 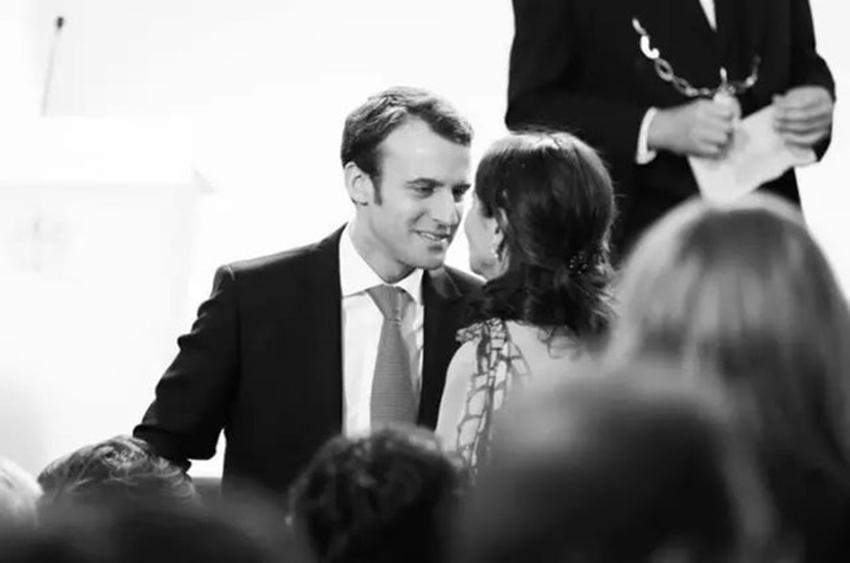 The "male god" in the hearts of French women

Prior to this, the Macron and his wife have always paid great attention to protecting privacy. The European Times analyzed that this was because Macron had been playing a big role in the political arena at a young age. In order to avoid criticism, the two deliberately kept a low profile.

However, this young and handsome minister is often mistaken for "single". According to a recent survey conducted by the Madmoizelle website, Macron has become the most attractive politician among French women, far surpassing US President Barack Obama and the handsome former French Treasury Secretary Francois Barouin. Even in the minds of many investigators, Macron is still single. Therefore, in the eyes of the French media, at the dinner on the 2nd, the appearance of Mrs. Macron and his wife is an opportunity for Trogne to become "popular".

Of course, this dinner is not the first time that the French media has captured Trogne's "true face". French gossip magazine "Closer" recently took a group of photos of the Macron couple walking in Montmartre over the weekend. At that time, Macron was wearing jeans and a white shirt, a casual outfit, and Trogne was wearing sunglasses.

In addition, earlier this year, the media also secretly photographed the romantic and beautiful vacation photos of Macron and his wife at Le Touquet beach in northern France. In the photo, the two people are holding hands, embracing behind their backs, and kissing tenderly, which is very sweet and affectionate. It is reported that in 2007, the two got married here.

The legendary "year-old love" between Macron and his wife Trogne goes back 20 years. At the time, Trogne was the French teacher of Maclone's sophomore year in Amiens.

At the age of 17, Trogne was in charge of teaching Macronaire French, and was quickly fascinated by his writing talent, often reciting the poems written by Macronaire in front of everyone. A former classmate said in an interview that “the teacher often praised Macron in class and used him as an example” and “she admired his talent very much”. In addition, the versatile Macron can also play the piano and dance tango, which also makes Trogne feel more like him. According to the "New Observer" magazine, Macron is an "outstanding pianist" and won the third prize at the Amiens Conservatory.

On the other hand, Trogne was already a mother of three children and had a failed marriage. However, for Micronaire, these are not important. It was difficult for Macron to erase this woman from a chocolate-making family in Amiens.

In 2007, this teacher-student relationship became a positive result, and the two married in Le Touquet. "Paris Race" described them as the true love of each other's life. Today, Trogne teaches in a famous religious school in Paris and has a third generation. Therefore, the 37-year-old Macron has also been promoted to "grandfather".

A "philosopher" good at economics Macron is currently the youngest minister in Hollande's cabinet and the youngest economic minister since Valerie Destin. Destin was only 1962 years old when he entered the Ministry of Economy in Bercy, Paris in 36.

The young French minister is not only legendary in marriage, but also in his political career. Macron was appointed as the French Minister of Economy in the middle of last year, and in the spring of that year, he was only an adviser to President Hollande.

However, this does not mean that Micronaire lacks experience. This "young philosopher" who was an assistant to the famous French philosopher Paul Rickel has a good economics. According to reports, Macron once served as the National Financial Ombudsman, and later became a corporate banker under the Swiss Edmund Rohill Group. A major transaction worth 90 billion euros made him a millionaire. Ranks.

In addition, Macron was also the number one figure in the French Ministry of Finance. He had a part in the introduction of the Organic Law and the European Treaty; he also helped Hollande plan the Liability Convention.

Therefore, when Hollande appointed Macron as the new Minister of Economy, although he was surprised by the outside world at first, he was quite expected, and he hoped that he could make the French economy fight a "turnaround" in 2015.

Article reprinted from the Morning News

Bull X, you can have a house and money without stocks! Hurry up, the boss will meet you in Melbourne! ‏