The government spent 1.5 million Australian dollars to build a new road connecting Melbourne Airport to Western Ring Road. This road will divert as many as XNUMX vehicles on the Tullamarine Expressway each day.

According to The Times, at the unveiling ceremony of the new road on Sunday, Victorian Roads Minister Luke Donnellan said that the 3.3-kilometer road will ease the congestion of the Tullamarine Expressway and allow commuters in the West End to go. The airport is much easier.

This new road has four lanes, including the renaming of part of Melrose Drive as Airport Drive. Next to this new road is a dirt road, which was pre-built for people along the airport, but this section is now got canceled.

This road is built between Sharps Road and Mercer Drive, directly connecting the airport and Ring Road. In the future, this road may need to be widened to six lanes. 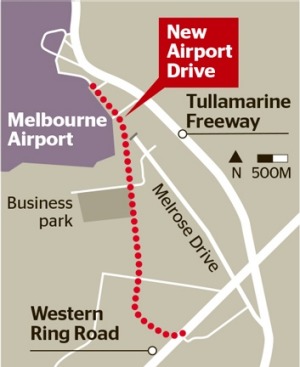 However, Donnellan did not make any promises about when Melbourne will build the long-awaited airport railway. Since Melbourne Airport began operations in 1970, all governments have vowed, and until now this railway has not been completed.

It is said that the project did not start until after the completion of the Melbourne subway transport route. Therefore, this large project costing 110 billion Australian dollars will not start until 2018.

Donnellan said, "Even though everyone feels the traffic pressure is great, we can't do anything except wait for the project to start."

Chris Woodruff, general manager of Melbourne Airport, said that everything is ready now, but the airport railway project has been delayed repeatedly and he is very disappointed. However, he said that in the absence of a new airport railway, he can understand the Victorian government's need to expand the carrying capacity of the transportation network.

He also said, “If you want Melbourne Airport to operate smoothly, all the government has to do is to build roads to and from the airport. The airport bus is actually operating very well, but eventually it will often encounter traffic jams. Once the Tullamarine Expressway is widened Operation, then the airport bus will flow unimpeded."

The former Napthine government declared that by 2026 the government will build a railway extending to Melbourne Airport. However, since the Labor Party came to power last year, the project did not follow.

Scream! The handsome chef moved the mobile kitchen to Melbourne