"Lotus Heart", a woman who integrates art into her life!

Yang Liping became famous overseas for her dance "Spirit of the Sparrow". At the age of 57, she has truly integrated herself into nature in her life.

A few days ago, netizen @陈玲417 recently exposed a group of photos of Yang Liping reading a book in her garden. The birds are surrounded by flowers, and they are like fairies. "This is the place where Teacher Yang's home reads daily... the birds all like to fly around her, it is worthy of the name: the sparrow spirit! I am already drunk at a glance!" Flowers and birds grow around all things, extraordinary and truly aura. Yang Liping is known as one of the five greatest beauties in China. She was born in Yunnan and loved dancing since she was a child. She became famous for "Peacock Dance" as an adult. Like and admired by audiences at home and abroad, audiences in Taiwan and Southeast Asia even call her the "God of Dance", and some people will call her the "Miko" who sees no end in the dragon. Yang Liping has experienced two marriages since his debut. In 1988, Yang Liping and a dancer from the Central National Song and Dance Troupe fell in love, but they found that they were not suitable for each other after marriage, so the two ended their marriage soon. In 1990, Yang Liping met her second husband, Liu Chunqing. The two held a romantic wedding in 1995. After marriage, the two have been in love. In 1999, Yang Liping became pregnant successfully, but if she wants to have a child, Yang Liping must gain weight. Supplementary nutrition, but Yang Liping, who has been dieting for a long time for the dance career, means gaining weight means that she will quit the dance career for a short time or even her whole life. After thinking twice, she decided to give up having children, but being a father is the right and wish of her husband. Decided to divorce her husband. After the divorce, Yang Liping regained her mood and devoted herself to the dance career, and continued to make great achievements. It is such a legendary woman, such a woman with only 6 ribs on her body, who is not married and sterile for dancing... Another group of photos of Yang Liping in her garden. The 57-year-old is wearing a white dress with her hair curled up and standing among the flowers. She looks like a pink girl, and the picture is beautiful and fairy-like. I couldn't help but sigh, the years seemed to have forgotten her, the younger she lived, the older she became more refined. The bluestone path is simple and quiet, with moss growing in the dark, and tall flowers with interlaced branches and leaves, mottled with light and shadow. The flowers were prosperous and brilliant, red and dazzling. There was just one person coming from the depths of the flowers, walking lightly, lowering his eyebrows, his hair curled on the top of his head, and a bamboo hairpin was inserted, and his body exuded the immortality of non-human fireworks. Some netizens left a message: With the petals falling into the swinging light years, they have unknowingly forgotten the mortal world; the bluestone slabs stepped on by the white-clothed woman bloomed with great splendor! Some netizens sighed: Transcendence seems to have reached the realm of immortality. It feels that she should not marry forever. Which man is worthy of it. From the photos, it is hard to tell that this is an "old man" in his sixties. This ethereal and tranquil beauty gives people a sense of beauty that can only be seen from a distance. It is definitely not an exaggeration to describe Yang Liping as "exquisite life, coquettish to old". In fact, Yang Liping talked about the secret formula of maintenance earlier. She said that she drinks soy milk in the morning and honey in the evening. She usually does some exercise and sweats. This is the best for the skin, and she must eat everything, not picky eaters, so as to have energy , Especially eat spinach and tomatoes. Yang Liping's beauty is a kind of natural spiritual beauty, just like her performance of "Spirit of the Sparrow", it shows the original ecological power of nature and bursts out the passion of life in the delicate and soft beauty. Now, many years have passed, and there is no trace of time. Her white dress still resembles snow. From a distance, she looks like a noble and elegant peacock. 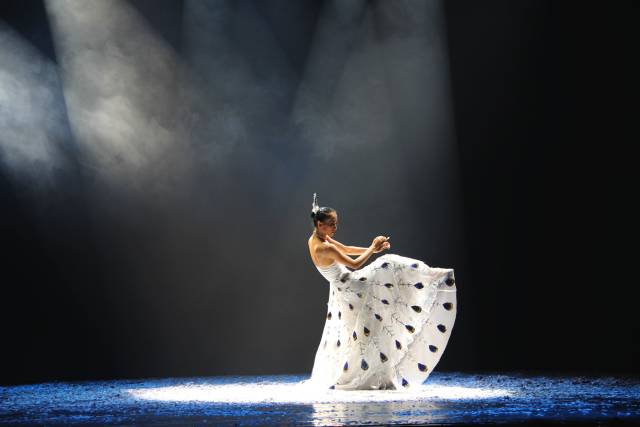 Yang Liping is not only beautiful on stage, but also exquisite and elegant in life. Chinese flight attendants on international flights: I really hope my compatriots are dressed as decent as they are‏

alert! In addition to the elevator maniacs, there are these invisible killers around you! ‏