Tracking the collapse of a construction site in Melbourne's eastern suburbs: Mount wavely, the issuance of building permits is notorious! ‏

On the morning of Thursday, July 7, a newly excavated construction pit in a residential area of ​​Mount Waverley collapsed. The two townhouses next to them are at risk in a cave-in. The construction pit is 15 meters deep. The project is to build a medical and child care center with an underground parking lot. The project cost is 550 million Australian dollars. Details of the landslide 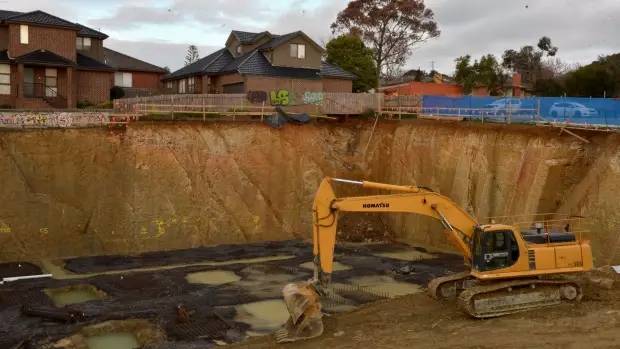 The construction site before the collapse

Today, the two houses next to the pit wall have become dangerous buildings, and the Victorian Building Authority (VBA) said they may have to demolish them together. The 14 college students living in these two houses are now forced to move into a nearby hotel, while the related expenses are borne by the developer. At the same time, the Construction Bureau is working hard to strengthen the walls of the construction pit.

Fearing that more landslides would pose a danger to traffic, the police blocked the roads near the landslide site and issued a 48-hour emergency order.

Gerry Ayer, the occupational health and safety experience of the Victorian Construction, Forestry, Mining and Energy Union, said the accident showed a near disregard for the safety of workers and the public because such construction pits are generally anchored by stone anchors. Pit walls, and pour concrete. "This will help maintain the pit wall and contribute to the overall stability of the building structure. So what should be done was not done," Aya said.

In the evening of July 7, there was a heavy rain in the area, and then two large pit walls collapsed. Now it can be seen on the scene that the backyard of the neighboring house has been eroded by the collapse, causing part of it to hang above the construction pit, showing that it is crumbling.

It is reported that the organization that issued the building permit for the project is the Gardner Group. A report from the City of Melbourne pointed out that Gardner Group is a private review agency. The report also pointed out that in the Docklands area last year, the high-rise apartment "Lacrosse Building" that caught fire due to poor quality building materials was also reviewed and approved by the agency. The fire scene of the Lacrosse Building last year

In November 2014, a fire broke out on the 11th floor of the 23-story Lacrosse Building. The fire reached the top of the building within a few minutes and hundreds of residents were forced to evacuate. The fire investigation showed that low-quality aluminum building materials imported from China were the culprit in the fire caused by a cigarette butt. Lacrosse Building after the fire

A related report from the City of Melbourne pointed out that any replacement of building materials on the exterior walls of high-rise apartments must pass multiple building permits. "The building permit and land occupation permit documents will be submitted to the city government, and the Gardner Group issued documents, there is no evidence that there are any changes in the building plan," the report said.

Come home today and tomorrow! Anti-Islam demonstrations will be held across Australia