Firefighters have become the most dangerous profession in the world, please cherish their lives! ‏ 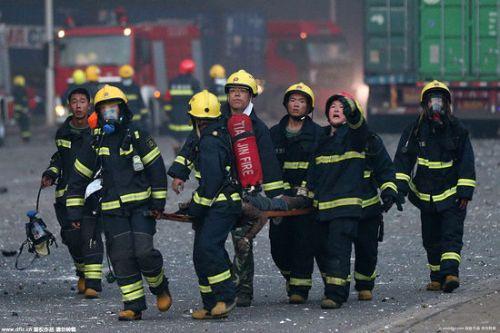 On the evening of August 8, an explosion occurred at a container terminal at the intersection of Fifth Avenue and Yuejin Road in Binhai New Area, Tianjin. Because the explosives contained inflammable and explosive materials, a mushroom cloud once rose on the scene and the situation was very tragic. Up to now, the explosion has killed 12 people and injured hundreds.

Although the final number of casualties has not been announced, judging from the current situation, firefighters may become the largest casualty group in this explosion. According to the latest news: At present, 12 firefighters have been confirmed to have died and more than 30 people lost contact. It is expected that the number of firefighters who sacrificed will eventually increase. Due to the unclear location of hazardous chemicals on site and the complex composition of combustibles, the disaster relief headquarters has decided to suspend the rescue. According to firefighters, the color of combustibles splashed on the ground is special, the composition is difficult to analyze, and it may contain toxic and harmful ingredients.

Why are the firefighters always injured? On January 2013, 1, three firefighters died in the Xiaoshan fire in Hangzhou. When they were discovered by their comrades in arms, they were still holding the water pipe firmly.

On November 2003, 11, a fire broke out in an eight-story quadrangle commercial and residential building in Xuanting Village, Zhuhui District, Hengyang City, killing 3 firefighters.

According to relevant statistics from the Ministry of Public Security, in the past five years, 5 firefighters have died on the front line of firefighting and rescue operations across the country, and more than 144 firefighters have been injured or even disabled each year. The average age of the firefighters who sacrificed was 300 years old, and the youngest was only 24. Most of the dead firefighters are "post-18s".

Firefighters are a high-risk profession all over the world On March 2014, 3, a fire broke out in an apartment building in downtown Boston, USA. The fire has spread to the roof, killing 26 firefighters and injuring more than 2 people.

On June 2013, 6, a wildfire broke out in Mount Yanel within the jurisdiction of Arizona, the United States. 30 firefighters died in the fire fighting due to excessive fire.

On May 2013, 5, a fire broke out in southwest Houston, killing 31 firefighters and injuring 4 firefighters.

For such a high-risk occupation, how do foreign countries guarantee the professional level and life safety of firefighters? First of all, the United States has a strict screening and training system for firefighters:

1. Educational requirements continue to increase. Many departments require firefighter candidates to have at least a two-year college degree in fire science, and some even require a college degree. The high education guarantees the high quality of firefighters.

2. Candidates must pass a series of tests such as physical fitness and fire protection knowledge. Physical fitness tests include strength, endurance, flexibility and overall physical function. In addition, candidates have to participate in various tests including fire protection knowledge and cooperation ability. Only those who meet the standards in all tests can sign up for firefighters.

3. Pay attention to vocational training and scientific research. New firefighters have to undergo 1 year of training. The first 4 months are basic training, including physical fitness, basic skills, and basic knowledge. In the next 6 months, team practice and intensive training will be conducted alternately. Only after passing the exam can they become official firefighters. In addition, the US Fire Department regards fire protection science and technology as an applied science and attaches great importance to transplanting scientific research results of other departments for use by the fire department.

Second, the United States has adopted a variety of incentive mechanisms to make firefighters a lifelong career:

2. High welfare guarantee, and provide enough room for improvement in the workplace. High welfare is an important reason why firefighters can work until retirement. Take the New York City Fire Department as an example. In addition to salary, firefighters and their families can enjoy medical insurance for life, and can enjoy up to 4 weeks of paid annual leave a year. Moreover, both in salary and position, they have a larger room for improvement.

With screening, training, high remuneration and high incentives, firefighters have long been a highly specialized profession in the United States and most other developed countries. In China, the “military service firefighting system” is still implemented. Firefighters are soldiers who are serving and are subject to my country’s military service system. Most firefighters are “temporary workers” with a two-year service period.

Can professionalism save more firefighters' lives? Whenever a major fire accident causes firefighter casualties, a large number of media will stand up and call for firefighters to be "professional", but can professionalism really reduce the firefighter's casualty rate? Although professionalism is not a panacea, it may be able to solve some of the problems existing in my country's current fire protection system.

1. The firefighter team is too young. As the current public security firefighting force is the main force of the firefighting team, military service defines firefighters as a short-term service occupation. Firefighters are discharged when they are old. As a result, the average age of firefighters is only more than 20 years old. The lack of experience will cause them Encountered danger in the fire. As a long-term profession, firefighters can retain more experienced firefighters and let them play a greater role in disaster relief.

2. The professional quality is not high. Due to the complexity and danger of firefighting work, extremely high professional knowledge is required. Only on the basis of ensuring the stability of personnel can professional training be carried out to enhance the professionalism and combat effectiveness of the entire team. In addition, professionalization also needs to start from the management system to reduce the situation of laymen commanding experts in the face of disaster.

At present, the rescue work of the Tianjin Binhai explosion accident has not been completed, and the final number of firefighters has not been announced. We don't know what caused the firefighters' heavy casualties. However, behind the lesson of blood, we hope that relevant departments can reflect on the problems that exist, such as how to reform the country’s fire protection system, how to ensure the professionalism of firefighting teams and the scientific nature of rescue, and even the fires of the entire society. How to improve the awareness of prevention and the level of fire management, etc., these are more meaningful things than mourning and praise.

May those firefighters who died heroically in the disaster rest in peace, and hope that there will be no more lives in vain in the future! note! You must know the disaster and self-rescue skills in distress! Can save lives at critical moments! ! ‏