Notice of the State Food and Drug Administration on the unqualified 2 batches of infant formula milk powder (2015 No. 51) 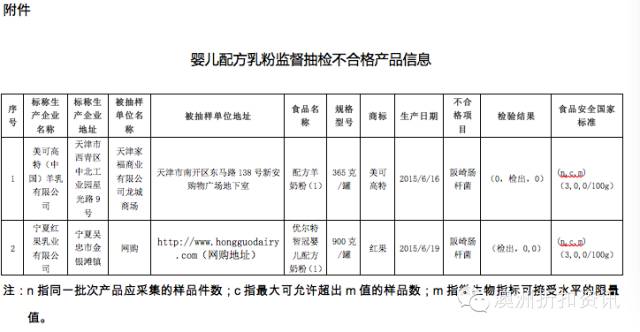 Regarding the Enterobacter sakazakii involved in this incident, the homepage has conducted a special investigation. The following is an introduction to this pathogen on Wikipedia. Its pathogenicity is very terrible! ! Parents should pay attention! !

"Most cases of Enterobacter sakazakii infections are infants, especially premature infants and low birth weight newborns with poor physical conditions. Infections mainly cause meningitis, sepsis, and necrotizing enterocolitis. Meningitis caused by enterobacteria often causes complications such as cerebral infarction, brain abscess, cyst formation and ventritis, and can cause neurological sequelae or rapid death. In addition to infecting newborns, the bacteria can occasionally cause local infections and bacteria in adults Blood disease and so on.

1. Meningitis in infants and young children: 75% of newborns born before term. The main manifestations are fever, pale complexion, convulsions or tremors, hypertonia, bulging of the doorway, and no stiff neck. Patients with bacteremia accounted for 5/8, necrotizing enterocolitis accounted for 2/8, and the mortality rate was as high as 75%. Meningitis caused by Enterobacter sakazakii often causes complications such as cerebral infarction, brain abscess, cyst formation and ventriculitis, and can cause neurological sequelae or rapid death.

2. Neonatal bacteremia: chills, low white blood cells, Enterobacter sakazakii can be obtained from blood culture separation, most of the symptoms are mild, such as severe sepsis, the mortality rate can reach 36%

The Inland Revenue Department will strictly investigate one million visa holders who have evaded taxes and are inevitable!

The sudden devaluation of the renminbi, these 11 words you should know