Your circle is too messy! What is Shi Yongxin's lower body? She said she knew‏

On August 8, a woman named "Ms. Liu Liming" on Weibo posted a photo showing the shorts she had left when she first had a relationship with Shi Yongxin at Yuda International Trade Sadian in Zhengzhou in mid-1. However, the Weibo content was deleted afterwards.

The arrest of prostitution, the lover of Peking University, the camera in the bedroom, the illegitimate child abroad, the billions of deposits... Shi Yongxin, who has come to this day in these rumors, still cannot cut off the harassment of the "red dust". Dismissal of monk status, luxury car, mistress, illegitimate daughter, transfer of assets... These recent reports have once again pushed Shi Yongxin to the cusp of "money, power, and sex".

For many years before, Shi Yongxin basically made a safe landing during various "storms", and his handling methods were relatively "plain." This time, it may be different. The day before yesterday afternoon, the relevant person in charge of the Shaolin Temple External Liaison Office replied that in the face of various so-called reports and doubts, the law must be allowed to speak. The abbot also said: This time we must make a decision and give people from all walks of life an explanation.

The adulterous woman said she was pregnant and miscarried

In the early morning of August 8, "Shi Zhengyi" again sent the report material, called "Shi Yongxin's Complete Evidence of Adultery". The material contained a woman surnamed Liu in the Criminal Investigation Division of Zhengzhou Public Security Bureau on the afternoon of June 1, 2004. The transcript of the brigade’s interrogation and a statement of circumstances signed by Liu. Zheng

The evidence is preserved because Shi Yongxin "speaks not to count."

The public security interview transcript photos published by "Shi Zhengyi" show that Shi Yongxin and Liu were interrogated by the Criminal Investigation Detachment of Zhengzhou Public Security Bureau on May 2004 and June 5, 29 respectively. However, the transcript of Shi Yongxin’s inquiry only had the first page and did not involve the issue of sexual relations. He claimed to report to the public security organs about being blackmailed by Liu. In the interview transcript, Liu stated that he had had sex with Shi Yongxin "twenty times", including a miscarriage by himself. The contents of their transcripts are all related to the management of the Buddha statue.

In the transcript disclosed yesterday, Liu said that he had sex with Shi Yongxin almost every time he met, and described in detail the first sexual relationship and the scene of her retaining each other's semen.

Liu said that the second time the two had sex was when Shi Yongxin returned from Germany, on the same day at the Oriental Mandarin Hotel in Hong Kong, she "had two or three relationships with him."

Liu claimed that the reason for keeping the evidence was because Shi Yongxin “said nothing counts” and denied that the two had a sexual relationship.

At the same time, Liu talked about the process of her miscarriage: She became pregnant after having sex with Shi Yongxin in April 2002. In June of that year, she was accompanied by doctor Wang to undergo an abortion at Shenzhen Second People's Hospital.

At the end of this transcript, Liu also told the police that he could clearly recognize the characteristics of Shi Yongxin's private parts. 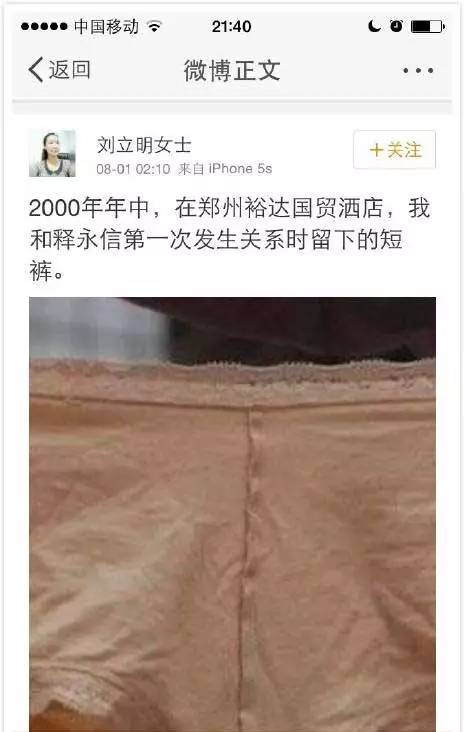 On August 8, a woman named "Ms. Liu Liming" on Weibo posted a photo showing the shorts she had left when she first had a relationship with Shi Yongxin at Yuda International Trade Sadian in Zhengzhou in mid-1. But the Weibo content was deleted later

The police once extracted evidence kept by the parties from Shenzhen

The other handwritten certificate signed by Liu also stated that on June 2004, 6, policemen Wang and Du from the third team of the Criminal Investigation Detachment of the Zhengzhou Public Security Bureau received reports from Shenzhen Second People’s Hospital based on Liu’s statement. Doctor Wang took the "a condom used by Shi Yongxin" she had deposited. "The condom is wrapped in a cup-sealed bag of the Guangzhong Hotel in Dengfeng, and sealed in a silver round jewelry box. The jewelry box is sealed with transparent tape, and the tape is affixed with'Liu Mocun' The note was then placed in a plastic bag, and the plastic bag was placed in an envelope printed with the Shenzhen Construction Training Center. The envelope was sealed with two staples."

As of press time, the authenticity of the above materials has yet to be verified.

According to another report, Mao Lixin, an associate professor at the Institute of Criminal Science of Beijing Normal University, stated that if the transcript provided by the whistleblower is true and public, it is suspected of breaking the law. "One is that the evidence obtained during the investigation stage is a state secret; the other is that cases involving personal privacy must not be heard in public even if the court is in session, and must not be released before the court session." He said that the transcripts made by the criminal investigation department cannot be made public.

Shi Yongxin: This time we must make a decision

Will give an explanation to all sectors of society

The relevant person in charge of the External Liaison Office of Shaolin Temple replied that in the face of various so-called reports and doubts, the law must be allowed to speak. The abbot also said: This time we must make a judgment and give people from all walks of life an explanation. But he did not disclose the specific time and measures.

How Shi Yongxin will make a judgment, what kind of "explanation" he will give, how this turbulent "showdown" will end, everyone, you need to wait and see. 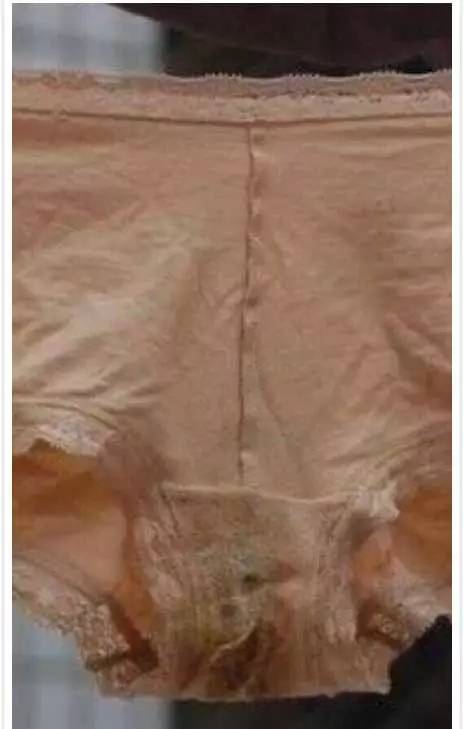 On August 8, a woman named "Ms. Liu Liming" on Weibo posted a photo showing the shorts she had left when she first had a relationship with Shi Yongxin at Yuda International Trade Sadian in Zhengzhou in mid-1. But the Weibo content was deleted later

Regarding the whistleblower's claim that "Shi Yongxin has two wives and two daughters", Shi Yongxin's mother, Hu Changrong, stated that Shi Yongxin is a monk and has no wives and daughters, and he has been a monk since he was a teenager and did not marry before he became a monk. .

She said that with the exception of her third son, Shi Yongxin, the other children have married and started their own businesses, and they also have grandchildren. The youngest grandson is 17 years old and does not need her to take care of him, let alone a 6-year-old granddaughter.

Regarding the whistleblower's claim that "Shi Yongxin has two wives and two daughters," Hu Changrong stated that Shi Yongxin is a monk and has no wives and daughters, and he has been a monk since he was a teenager, and he has not married before he became a monk.

Shi Yongxin is a fellow villager

He is very low-key, we didn't touch him a lot

The day before yesterday, the reporter came to Huazhuanghu Village, where Shi Yongxin had lived since he was a child. The village is not very big, mostly with the surname Liu.

70-year-old neighbor Liu Chuanzhi told reporters that Shi Yongxin left the village without graduating from junior high school. "He was different from others when he was young. The older ones bullied him, he didn't fight back very much, and he was very filial." Later, several neighbors told reporters a story about how Shi Yongxin became a monk. "We all know it in our village!" Liu Yingde, a 78-year-old old man in the village, said that when he was fourteen or fifteen years old, his family raised rabbits. Shi Yongxin went to the town to buy sorghum straw and came back to make cages. The old monk wants to fortune to him and doesn't want money.

"The old monk said that you had to go out in your hometown when you were not promising, and then left a letter of introduction to Shaolin Temple." Liu Yingde said, a few days after returning home, Shi Yongxin did not tell his parents, so he took the introduction first. The letter went to Shaolin Temple and met with the abbot Shi Xingzheng, and he was determined to stay in Shaolin Temple.

Several villagers went to Shaolin Temple to find Shi Yongxin. Most of them were relatives who wanted to send their children to a martial arts school to learn martial arts, but some gave up halfway. "You see that our village is not rich. How do you really say it? He is very famous, but we don't have much light on him. He is a monk and we can understand." An old man said, everyone can go to Shaolin Temple. He would take it to play, but he didn't have time to accompany it all the way.

Is investigating the authenticity of "Shi Yongxin dual household registration"

The reporter came to the Yingshang County Public Security Bureau the day before and asked about the authenticity of Shi Yongxin's dual household registration and birth certificate. Party committee member Wu Tao said that he was investigating and other information was inconvenient.

The abbot of Shaolin Temple in China, Shi Yongxin, who is trapped in the whirlpool of public opinion, has not changed his itinerary to Thailand. On August 8, more than 1 members of Shaolin Temple's resident mages, Shaolin monks and laymen set off to Thailand for cultural exchanges. The itinerary of the "Shaolin Cultural Silk Road Journey" Thailand cultural exchange activities has been confirmed as early as early July. However, this trip has attracted much attention due to the recent Internet "rumors of chaos in private life" by Abbot Shi Yongxin. Zou Xiang, the person in charge of the Shaolin Temple Network Department, confirmed to reporters on August 80 that the schedule of the trip has not changed. According to Zou Xiang, they set off on the afternoon of (7st), and they were accompanied by the Shaolin Temple resident mage, the person in charge of the lower house, the Shaolin monk group, and some laymen, totaling more than 8 people. 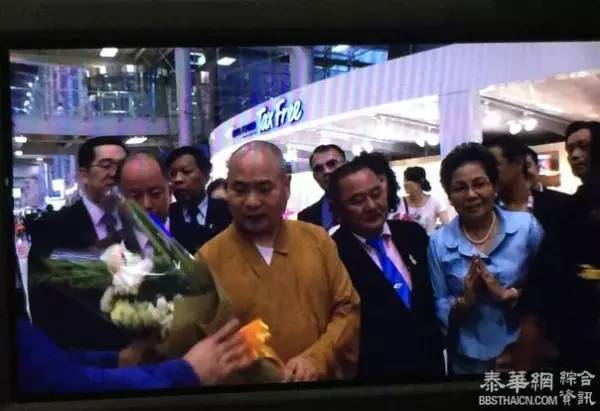 According to Thai media reports, the reporter confirmed at the Chao Nam Hotel where the Shaolin Temple delegation stayedShaolin Temple Abbot Shi Yongxin failed to arrive in Bangkok with the delegation as scheduled. The picture shows the first Shaolin Temple Master Shi Yongfu led a delegation to Thailand on the evening of the 1st.