In the past two days, a study on the graduation rate of Australian universities has been posted on the Internet again, which has caused heated discussions! Many international students’ universities are on the list decisively, let’s take a look for yourself...

This morning, this passage came into our eyes:

More and more Australians are making the wrong choice for university!

Once upon a time, a few weeks ago, the Australian UniversityThe rate of disqualification was disclosed!

The 10 universities with the highest enrollment rate in Australia! Seeing this, many students said that Australians must be the same as us. They felt that the degree was too high, so they chose the wrong university.

However, after reading the latest reports from Australian media, you will find that you are wrong:

It turns out that the latest news about...Australian UniversityGraduation rateThe ranking is out! Is this changing the direction and talking about the rate of failure?

First of all, Australian media said

In Australian universities,One out of every three students is eliminated!

It is reported that the university graduation rate study comes fromThe Australian Federal Government,So authority does not need to be verified!

Not much to say, let’s go straight to this graduation rate analysis: 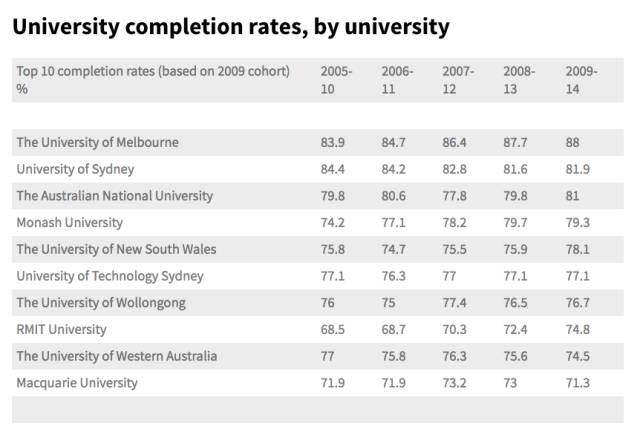 According to the data, the Australian government has calculated a time period every 5 years.

Looking at the latest time period, the graduation rate looks like this:

In general, Australia’s three so-called prestigious universities: Sydney, Mexico University and ANU are all universities with the highest graduation rates.Both are close to or higher than 80%! Other universities seem to be even worse:

4 in 1 students cannot complete their studies!

RMIT University turned out to be 68.5%, becoming the university with the lowest graduation rate!

One of the three basic students cannot graduate!

And this is in line with the description of the Australian media:

Even so, some people say what about the previous years?

Looking at the ranking report above, in the past few years,

Someone asked: Why is 5 years taken as an interval?

That’s because many local students,No one can't graduate in 4 or 5 years!

Someone asked: What makes such a low graduation rate?

The government stated that because

1. The wrong choice when choosing a major

2. The difficulty of the course is too difficult

3. I have other interests

So, in the end, the government officially suggested that students should pay more attention to

Not on the university rankings...

Having said that, satisfaction is actually the rate of dismissal and graduation, right?

Well, it is really difficult for Australian universities to satisfy their students. If someone asks in the future"Is it super easy and easy to study in Australia?",Please stick this data directly on his face!

Australian students are all angels with broken wings in their previous life...

Kangaroos are cute? Australian woman was beaten by a kangaroo in the morning jog! Battered all over, 35 stitches stitched!

Shrimp prices increase! Because of this Chinese company, all Australians have no shrimp to eat!

This bull is not bragging! Latest Australian University World Ranking‏

up to date! The 2017 USNews Global University Rankings are released! Seven Australian universities have reached the top 7, and University of Mexico won the first prize!