Kangaroos are cute? Australian woman was beaten by a kangaroo in the morning jog! Battered all over, 35 stitches stitched!

At around 1 am on January 14, 6-year-old woman Debbie Urquhart, who lives in Melbourne's Templestowe district, went out for a morning jog.Encountered a fierce attack by a 2 meter tall male wild kangaroo.

After being kicked by claws in turn, they were thrown around like a rag doll.

In the end she gave her up, lying on the ground and pretending to be dead, waiting to either escape or be completely free.

Fortunately, the kangaroo stopped. She hurriedly rolled into the grass on the side of the road, then stood up, dripping blood, and rushed to home 300 meters at her incredible speed, screaming loudly. The husband rushed him to the hospital. She stayed in the hospital until 4 pm the next day.

"When it came to attack, I felt like I was hit by a damn truck. The more I yelled, the more it hit me. I could only avoid it."

Kangaroo's attack lasted only one minute before and after, but it has caused her to be sewn with as many as 35 stitches. Ms. Urquhart accepted the upper right arm seam20-pin, Right shoulder seam10-pin, Three seams on the hip5-pin, Accompanied by many other injuries in the body.

She felt very lucky that she had survived.

She finally reminded Melbourne residents, especially those living in the Templestowe area, to pay attention to safety and be alert to possible attacks from kangaroos.

The perpetrator has not yet been found. 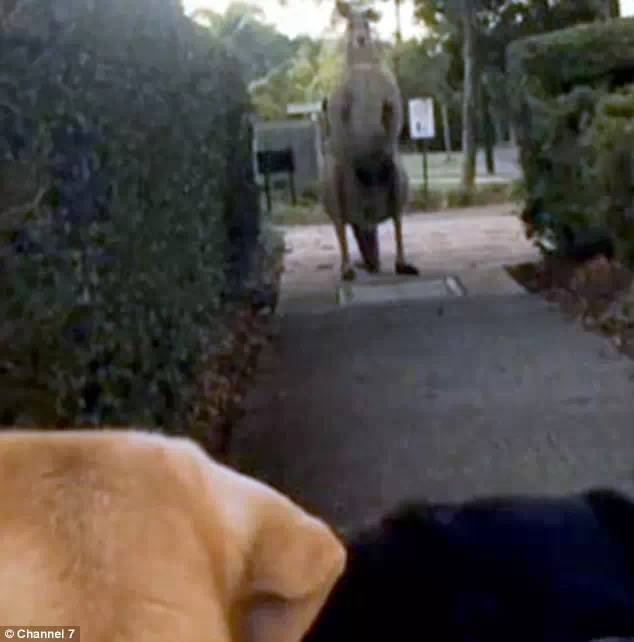 Do you still remember the little brother who bravely singled out the kangaroo and saved the dog? Looking back now, if Kangaroo chose to continue pestering him...

They are not far away from your life.

A review of kangaroo injuries in recent years

July 2008: American zookeeper was "punched and kicked" by kangaroos

March 2012: A 3-year-old resident of Australia was attacked by a kangaroo in his backyard and his calf was torn

May 2013: A jogging in the suburbs of Canberra was beaten by a kangaroo, leaving many bruises on his legs

September 2013: A 9-year-old boy in Grafton, Australia was attacked by a kangaroo in his backyard and was seriously injured

October 2016: A 10 cm kangaroo broke into the backyard of the residents and killed the Pomeranian. The owner and guard dog were eagerly injured

December 2016: A family camping in Australia was attacked by a kangaroo, and his father was saved by a choked throat and an ear risk.

Kangaroos are so fierce, how to prevent them?

In Australia, there are more kangaroos than humans!

Evis, a government wildlife ecologist, said that kangaroos generally do not deliberately go out of the undergrowth and attack people. They are usually foraging for food. People think they are cute and take the initiative to approach. At the same time, he pointed out that because of the lack of food, kangaroos now change their habit of resting in the shade during the day and looking for food at night. They often look for food during the day, especially in open places with water such as golf courses and sports fields.

Although in most cases, kangaroos will not actively attack humans.But it is an animal that is very alert and self-protective.Once you feel threatened, you can either jump away quickly or give you a set of combo punches...

The kangaroo not only has muscles and powerful hind legs, it can stun a strong man on the ground in an instant!There was once a fellow traveler in Australia who was pierced by a kangaroo and suffered a lifelong concussion...

In addition to kicking with feet, the sharp claws of kangaroos scratch people even more powerfully. Even their tails can kill people! All these things that are usually ignored,都Will become a deadly weapon!

What if you encounter a tall and mighty violent kangaroo on the road?

First of all, it is still necessary to avoid entering and leaving the wild kangaroo dense area. Such as the north and southwest of Melbourne. Even if you encounter it, you'd better drift by quietly...

If you are unfortunate enough to encounter a kangaroo trying to attack you, then from Debbie’s experience,Fleeing and resisting are useless, but may arouse the kangaroo's desire to fight.

Kangaroos are herbivores and do not bite. Its so-called attack is kicking and scratching. If you stay still, there is no threat to it. After all, kangaroos are not so boring to attack a dead object...

If you are really very unfortunate and encounter a madman who does not play cards according to common sense, then maybe this kangaroo fighting guide from netizens may be useful...

Just kidding, I still advise everyone to stay away from kangaroos and run as much as possible if you can...

The latest research from the University of Moore found that the most dangerous poison in Australia is not a poisonous snake or a poisonous spider, but this little...

Without grandchildren and playing mahjong, what is the retirement life of the elderly in Australia?