The most animal hotel in the world is in Australia. Bears are watching in the bath, tigers and lions are always jumping on the table

However, all hotels are probably like this, right? However, recently there has been a very different and unique hotel, which instantly reflected the limited experience of the editor even more limited! After reading it, I even suddenly felt a feeling: the hotels I have stayed in before are absolutely ordinary what! There has never been a hotel that makes me feel alive:beast! Sex!

When you wake up, take a closer look, oh, there is a tiger roosting by the bed...

When you are lying in the bathtub, a simple bear peeping from less than 1 meter away. When eating, a lion seemed to jump on the table while talking.

Go to the balcony early in the morning and raise your hand to get in touch with the giraffe. Cheetahs, lions, rhinos, tigers... all kinds of ferocious animals. If you don't tell you, do you think you have stepped into the African grasslands in a daze? In fact, this frightening place is not in Africa, but in Canberra, the capital of Australia, and it is only 5 kilometers away from the city center. This is one of the largest private zoos in the world and the most animal hotel in the world, the Jamala Wildlife Lodge. 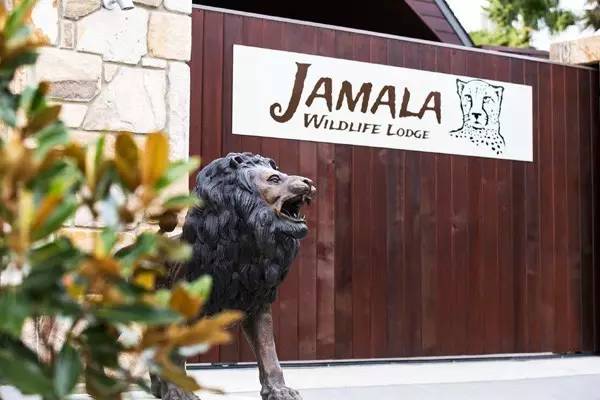 Richard Tindale is the owner of this hotel. His love for animals has been almost crazy since he was a child. When he grew up he became an animal photographer. He has been doing this for nearly 30 years. In the 30 years, Richard’s most heartbroken moment was when he encountered poachers hunting wildly for profit. He had no sympathy or compassion for animals. Once he took photos of poachers hunting elephants, but was caught The man held a gun in his head and almost died for it. 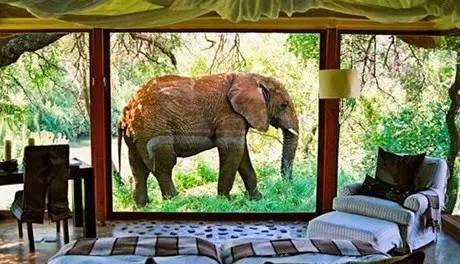 From that moment, Richard made up his mind to build the zoo at home, a place away from hunting and pain.

Even if you do everything for one animal, you don't hesitate. Finally in 1998, he caught the opportunity, and the old aquarium, 5 kilometers away from Canberra's city center, was listed for sale, covering an area of ​​8 acres.

Surrounded by lush vegetation, the semi-wild environment is exactly the ideal place Richard seeks, so he bought it without saying a word. 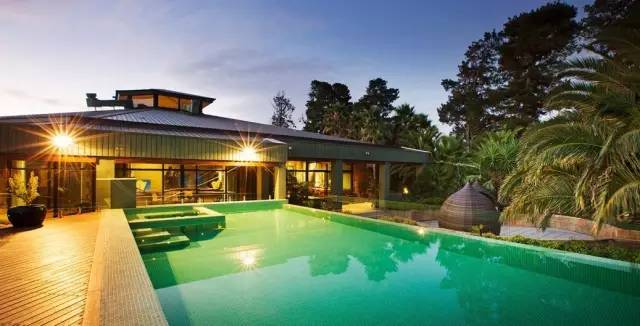 The family praised Richard's dreams and behavior, and spent 18 years with him to turn this dilapidated aquarium into a brand new zoo plus aquarium. There are three main types of animals that come here. One type is poaching, poaching, and luckily rescued but loses the ability to survive in the wild;

Moreover, the retired animals of the circus were too old to perform anymore, and were abandoned alive, starved to death, or died of illness;

"I hope these little creatures, the pain they have encountered in the first half of their lives, can be comforted here."

In order to rescue poor animals around the world, Grandpa Richard did not hesitate to rent a jumbo jet several times. 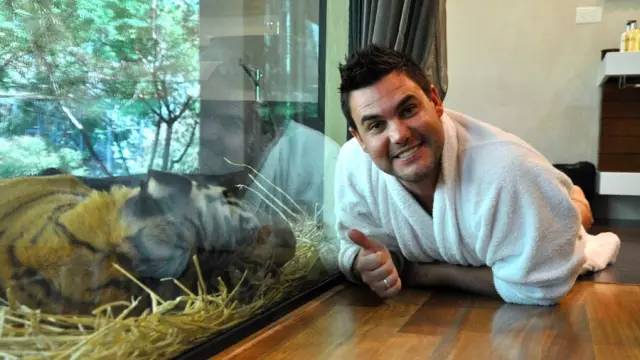 The hotel is built here to maintain the daily operations of the zoo. As long as there is a surplus, it will be donated to the animal conservation plan. 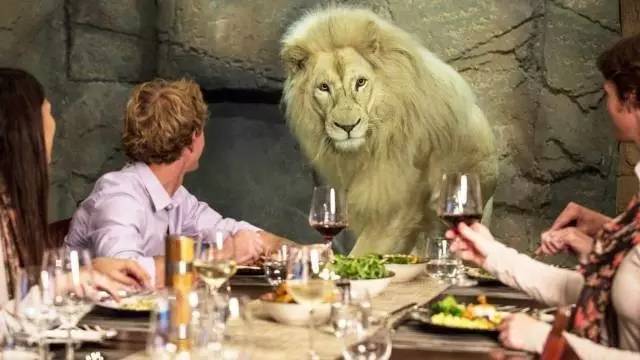 There are 18 rooms in the hotel, scattered in every corner of the zoo. Giraffe house, shark house, jungle house.

There are 6 giraffe houses, which are also the highest. The giraffe lives in the backyard and walks up to the balcony to feed it.

Sika deer and alpaca live in the front yard. You can step into them at any time, get in touch with them, and touch them lovingly. 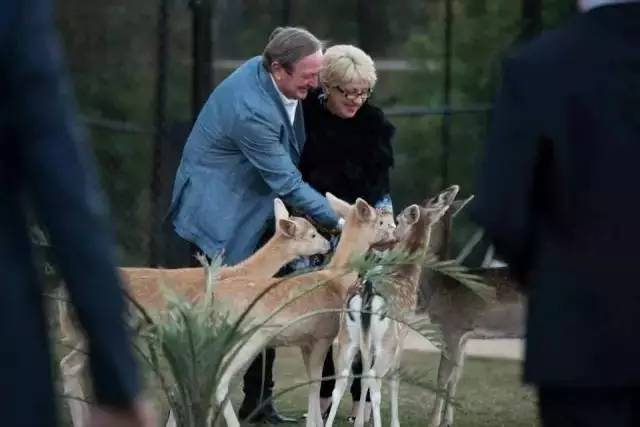 The bathroom in the cabin is also ingeniously paved with a giraffe theme. There are 7 shark huts, 7 of which are all connected to the aquarium. Living in them is like entering a dreamy underwater world for minutes. 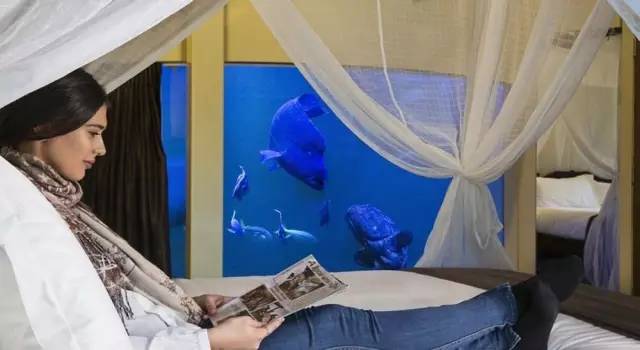 On the platform outside the shark hut, you can take selfies with monkeys and lions. The jungle hut is the most exciting. You can learn about the large carnivores that you usually don't dare to touch.

Take a bath with a brown bear. 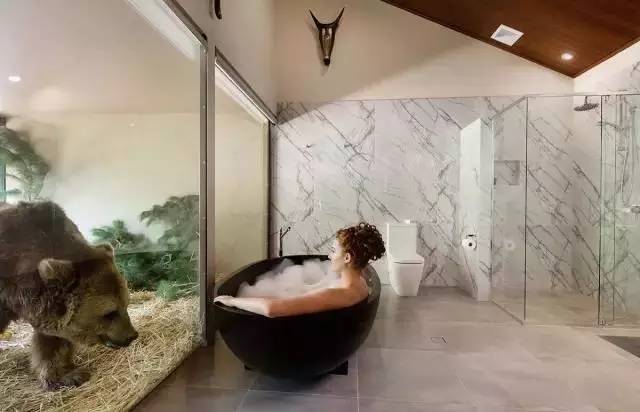 Through the safety glass, there is no dangerous obstacle to the closest contact with the tiger in life.

Have a cup of coffee and quietly appreciate the elegant side of the leopard. Or simply lie on the ground and roll, just to feel the bear world firsthand. 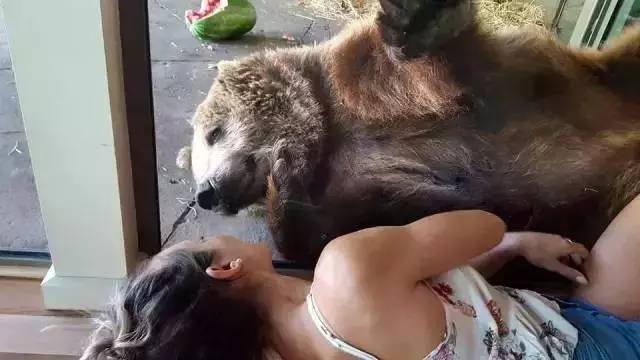 Staying in any of the three types of rooms will give you two opportunities to have close contact with wild animals, but rest assured, professional staff will take you to play.

When professional animal breeders meet children who come to play, they will also specially explain the survival status of endangered animals around the world, and the harm caused by unethical hunting and poaching. Encourage them to love animals from an early age. Even with the care of professionals, many people still worry about whether animals will harm them.

In fact, you can rest assured that professionals will be by your side at any time, and will repeatedly emphasize which parts can be touched when in contact with animals, and which places must not be touched.

Now, under the leadership of Grandpa Richard, his wife and 6 children have all fallen in love with animal care, and three of them have entered the zoo. It is this kind of humanity and warmth that makes people who have been here fall in love with it, not only because of the delicious food and considerate service, but also because living here can make a contribution to animal conservation. People feel sincere The comfort and warmth. 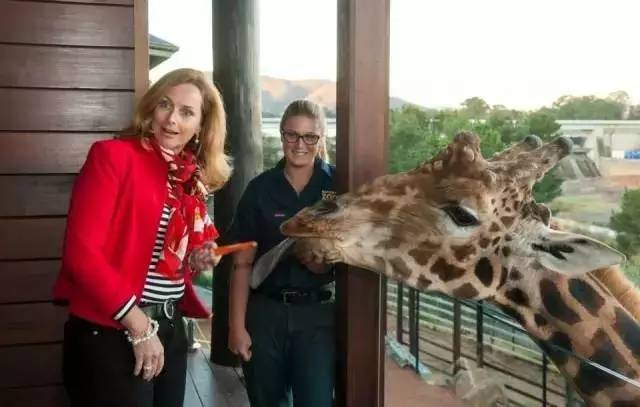 Do not cross boundaries, do not overstep the rules, love animals like humans, even if their animal nature is still there, they can still perceive your kind respect and existence.

A backpacker was flying a plane in Australia, but it leaked in mid-air! Seeing that they were about to hit, they jumped directly