Please, don't let "she" disappear in this world!

According to reports, the cute "Australian billowing" koala is on the verge of extinction in some parts of Australia!

Speaking of koalas, the cute look immediately appears in front of you: soft fluff, cute eyes and slow movements, just like animals coming out of a fairy tale world, making people love at a glance On it.

No matter who it is, all you have to do to come to Australia is to hug them and take another photo!

In the birth of koalas, they spend 20 hours a day to sleep!

The remaining 3 hours are eating with life!

And what people never expected is,In recent years, the number of koalas has decreased dramatically!

In some areas of Australia,Such a beloved koalaIs facing the danger of extinction!

"The koala extinction is happening unknowingly!"

QueenslandFraser CoastThe once prosperous koala population on the coast is on the verge of extinction, and researchers are currently doing a lot of investigations.Try to find out the cause of the extinction of the koala. It is understood that in a15In the public survey last year.There was a large number of peopleMaryboroughsouthernTiaro has seen a koalaThe presence.

And now.ResearchersAnthony SchultzStayed there2Survey.But there was no koala, or any trace of a koala inhabited!

"We found nothing.This is amazing! There are many environmental residences suitable for koala life in this place.Many national forests and protected jungles, KoalaWe should be able to spend a good time here,"Anthony said. "What we must admit is that the koala extinction is happening unknowingly!"

"I think that in the past 10 years, we have a chance to reverse this state of koala extinction. But why no one told us all this? ”

Researchers have trained dogs to find places where koalas have stayed and said:"KoalaIt’s hard to find, even if people spend a lot of time studying koalas.But it may also be easy to miss them."

Where are the koalas?

Koalas face many threats in nature.Including dog attacks, bush fires, loss of habitat trees and diseases, etc..butTiaroThe reason for the disappearance of so many koalas in the region is still unknown. But what is certain is that the number of koalas is drastically decreasing!

"althoughThere are enough environments for koalas.But we still couldn't find any koalas."FromKoala Care Fraser CoastOfNatalie RichardsonSay:"In recent years, there have indeed been fewer reports of human sightings of koalas."

"We are right nowthe Fraser CoastOf koalas are very worried.Koalas in many areas here are slowly disappearing, TiaroIt is one of them."

Humans continue to encroach on the habitat of koalas,Local man-made development and construction, natural disasters and diseases are among the important reasons

"Chlamydia infection must be one of the reasons.Besides.I think the loss of koala habitat due to road clearing is also to blame."Natalie said."OnmaryWhen the river floods, KoalaIndeed, a lot of habitat has been lost, and the drought has also caused a decline in the number of koalas."

She is convinced that Tinana in the north of Tiaro will be the next area where koalas will be extinct.

"This is so disappointing.Heartbroken and depressed,"she says. "I hope this extinction is only a phenomenon in a small area. I believe people still have a lot of research to do.To alleviate this situation."

City construction is fast,The eucalyptus forest on which it depends for survival is gradually destroyed!

There are currently about 10 koalas in Australia, and 80% of them live in temperate forests on the eastern coast of Australia. Eucalyptus leaves are the main food for koalas.

However, with the acceleration of urbanization, the eucalyptus forests closely connected with their lives are slowly being destroyed, "Australia Rolling" is facing a severe survival crisis!

As early as a few years ago, the Australian Koala Foundation conducted an inspection of 1000 koala habitats, but the situation is very unoptimistic. 30% of the habitats have no traces of koala life. A lot of habitats have been destroyed on a large scale! 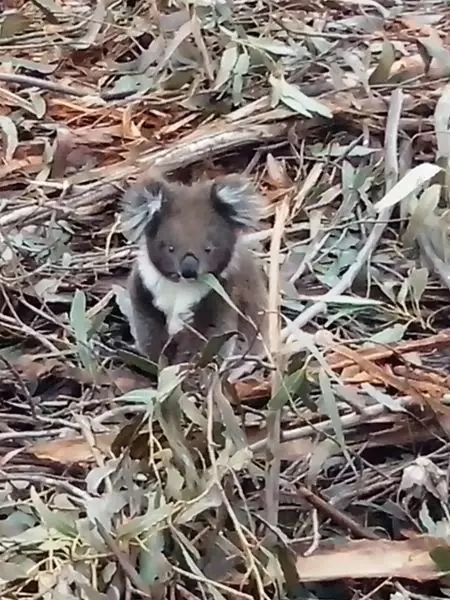 The executive director of this organization said: "After follow-up investigations, the survival rate of koalas is very not optimistic. Unless we can create a good living environment for koalas, they will be on the verge of extinction in our lifetime."

The living environment is harsh,The "road to death" accidentally injured by humans

In Australia, koalas have no natural enemies. In the past few decades, the number of koalas has gradually decreased. In addition to the large number of eucalyptus trees being felled, other reasons include urban expansion, car accidents and dog bites.

(Koala hit by a car)

According to data published on the website of the Koala Conservation Foundation, there are as many as 4000 koalas killed in car accidents and in their mouths every year!

From September to November each year is Australia's spring. The temperature is just right and the spring flowers are blooming. Many people choose to travel in this beautiful season. During this period, it is also the breeding season for the koalas.

They often wander between their own survival maps to find their favorite spouse, so they inevitably have to cross some city highways.

And it is these highways that have become the "road of death" for the koala!

Therefore, when you travel, you must pay more attention to these warning signs on the road!When you see the prompt "There is a koala ahead", remember to slow down to avoid danger.While protecting the koala, you are also protecting yourself.

Such cute and cute koalas, do you have the heart to let them disappear in the world? Even if natural disasters cannot be controlled, the harm caused by humans is absolutely inexcusable. Give it to those around you, protect nature, and protect koalas!

The Australian Customs has officially abolished the exit card and will fully implement the electronic passport, making it easier to enter and exit in the future!