Melbourne's oyster story opens the door to Australia's "oyster" for you!

"The proliferation of Danish oysters" is one of the hottest topics in the gastronomy industry recently, which has attracted countless people eager to try. This invasive species that has become a disaster in Denmark is the famous Pacific oyster. In Melbourne, Australia, oysters are not only non-disaster, they are also a representative delicacy that people love. The autumn and winter oysters in the southern hemisphere are extremely plump, and you can start looking forward to it!

Broad and profound, the knowledge of oysters

The first person to eat oysters was absolutely courageous, and he dug up this delicacy for countless people afterwards. The history of human consumption of oysters has a long history. As early as 1 years ago, oysters were a Chinese meal of the Midian people living in Australia. In the XNUMXst century BC, the ancient Romans began to study oyster farming in the Italian peninsula. Until today, oyster cultivation has developed an advanced and mature system.

The oyster family has a rich variety of different flavors, such as strong metallic flavor, refreshing seaweed flavor or sweet creamy flavor. Each flavor retains the characteristics of different seas. In addition to Australia's two major indigenous speciesSydney Stone Oyster (Sydney Rock Oyster) andAngus Flat Oyster (Angasi Oyster), Tasmania and South Australia Coffin Bay, Smoke Bay and Strequi Bay are also rich in introduced speciesPacific Oyster (Pacific Oyster), its meat is delicious and plump, and the taste is sweet and crisp. After a bite, the fresh breath of the southern hemisphere ocean will come to your face.

Oysters grow in layers on oyster beds. During the harvest season, fishermen will use different tools to catch the oysters. When the oysters are just out of the sea, they hold the oyster knife and gently pry it, accompanied by swishing in the salty sea water. In the slippery entrance, this freshness and tenderness can make people happy all day!

Nature treats the Australian people in a special way. You can enjoy fresh and delicious oysters throughout the year. Since March of each year, the southern hemisphere enters autumn, and the oysters also begin to store energy to resist the cold. Therefore, Australian oysters in autumn and winter are exceptionally plump, remember this The best oyster eating period!

1.Types and distribution of oysters

Oysters are produced all over the world, and the specifications are divided from small to largeCocktail, Bistro, Plate, Large和jumboFive grades, common varieties include:Atlantic Oyster (Atlantic Oyster): Atlantic coastKumamoto Oyster (Kumamoto Oyster): Kumamoto Coast in Southern Japan and West Coast of the United States

Combination of Chinese and Western, a treasure of oysters

The crumbly hard shell contains a sweet and delicate bite, high in protein and low in calories. The oyster is not only an excellent source of vitamin A and vitamin B12, it is also rich in calcium, iron, zinc, selenium and other trace elements, which is delicious. + Rich nutrition, people have to love. 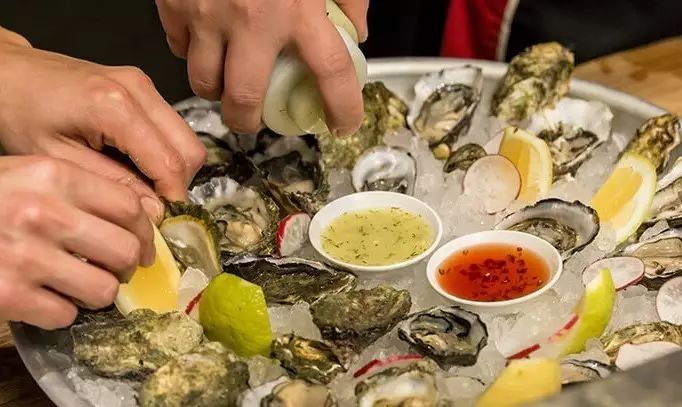 Freshly caught oysters have a natural taste, and the original raw food is of course the best choice. This is also the favorite way for Australians to taste oysters. Open a fresh oyster full of juice, dip it in your favorite sauce, or simply squeeze in a few drops of lemon juice. The oyster meat is smooth and the oyster skirt is crisp and crisp. Surround the taste buds, deep and continuous. At this time, if you come with a glass of white wine and white wine with white meat, the delicious taste of oysters will be further sublimated.

Western-style oyster dishes are also diverse. In addition to my favorite cheese-baked oysters, there are also fancy grilled oysters supplemented with various sauces and garnishes. Just think about it. The editor will also introduce you a classic oyster dish-Angels on Horseback (Angels on Horseback), bacon wrapped oyster meat, brushed with salty and spicy sauce, baked until the bacon is slightly crispy, and served with butter. Buns are often used as appetizers. What's interesting is that if the oyster meat inside is replaced with dried fruits, it becomes a sister dish-Devils on Horseback.

Oysters are also a favorite food of the Chinese, and cooking delicious food is also a Chinese specialty. Various seasonings such as sweet, sour, bitter, spicy and salty, cooking methods such as steaming, frying, frying, stewing and other cooking methods, fusion of unimaginative cuisine, the popular menu about oysters can list one Long skewer: garlic oysters, fried oysters, fried Chaoshan oysters, all delicious!

Raw oysters should be used for raw food, because raw oysters will secrete a large number of bacteria after death, so they are not suitable for eating raw;seasoning: Use lemon juice, shallot vinegar, cocktail, red wine vinegar, mint juice and other sauces for flavoring, in order not to destroy the sweetness of the oyster itself;Wine pairing: Taste balance and consistent origin are the two main principles for choosing oysters. French champagne, Sauvignon Blanc and Chardonnay are traditional wines. It is not recommended to use late-maturing or high-acidity wines, which will make the oysters refreshing. discount.

The signature oyster temptation of the world's 50 best restaurants

Brae is ranked 2017th in the star-studded 50 World's XNUMX Best Restaurants list (and second in Australia). The owner, Dan Hunter, transformed the old farmhouse into a modern and elegant restaurant, using fresh ingredients directly from the week. By the side farm, the taste and quality are guaranteed. At the same time, the fresh and pleasant rural scenery is also a big enjoyment for visiting Brae.

It is definitely a wise choice to come to Brae restaurant to taste oysters. One of the restaurant’s signature dishes is this oneIced Oyster. The superior location adjacent to the Great Ocean Road guarantees the freshness of the oysters. What's more, the fine and dense cream and dried seaweed powder cover the whole oyster, giving it a smooth taste and the ultimate taste.

Oyster area, waiting for you to enjoy

Compared to Brae's natural and authentic nature, The Atlantic is taking another fine line. The Atlantic integrates the pursuit of exquisiteness in all aspects, from exquisite interiors, warm atmosphere to impeccable service and fresh food, supplemented by the south bank riverside scenery, every visit will not disappoint. The restaurant has ingeniously opened up an oyster areaOyster Bar & Grill, There are rich varieties of oysters, as well as a series of hot and cold seafood dishes, which must be added to the Melbourne oyster recommendation list.

Stepping into Smith Street, stepping up the stairs of the New York-style building, pushing open the thick door with a sense of time, the spacious and bright attic space is in front of your eyes, here is your place to enjoy delicious food. Sitting by the floor-to-ceiling arched window, the light that penetrates is bright and warm, ordering a glass of gin, and tasting European-style dishes, it is extremely pleasant to enjoy. The most special thing is,6-7 pm every night, only 1 Australian dollar per oysterFor oyster lovers, who want to focus on eating and enjoy eating, this is definitely a stop not to be missed!

In the cold winter, only the "flying saucer" can warm your stomach, let alone you don’t know what it is

The Australian Tourism Board released: 11 landscapes that can only be seen in Australia, unique and childish