It turns out that putting the leg on the seat on the Australian bus is more severe than the fare evasion.

In Ao Village, if you don't have your own car, facing the sparsely populated and expensive taxis, buses and trains are a must for many Australian Chinese and overseas students! However, as the Australian government has become tighter and tighter, the commuting costs of public transport across Australia are also getting higher and higher, and the price of transport costs remains high. Some people have chosen fare evasion as a response, so relevant departments across Australia have also increased accordingly. Up their own fine price.

But the editor was surprised to find that compared with other fines, the fine for fare evasion is actually the lowest!

Due to the different laws and regulations of each state, in Victoria as an example, the fine for fare evasion is "only" A$229, and the price in NSW is A$200-550.

In Victoria alone, more than 3 people were fined for putting their feet on their seats because of the comfort of the moment, generating more than 8 million Australian dollars! Parents with children should also pay attention to the fact that it is also a violation of the child's foot to step on the seat while holding the child, and a corresponding fine must be paid! So parents must take care of their children.

Although the fines for fare evasion are relatively small, at least 28 people are still "captured", and the total amount of revenue generated for the government exceeds 2000 million Australian dollars!

At the same time, smoking on public transportation, Unlawful interference with car doors and other dangerous behaviors,

Put any part of the body outside the car while driving, 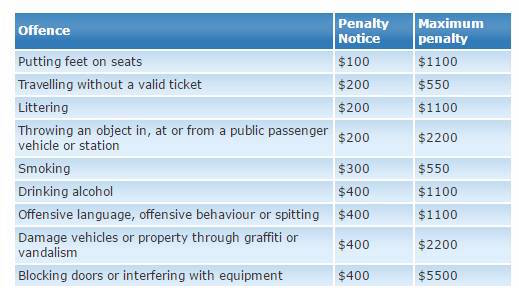 Victorian Public Transport spokesperson Adrian Darwent said that fines are actually used to reduce passengers' bad behavior on buses, trams and trains. "Although the public has a little bit of fines, some people do not respect these regulations. We will not feel sorry when we execute it."

In fact, the purpose of fines is to put an end to uncivilized phenomena. As long as you know how to respect others, fines are nothing to fear.

Top 15 most fun places in Melbourne, each is worth playing for a whole day