Joy欢红liqueurEveryone, don’t spend a few hundred dollars on a bottle of French Bordeaux or Italian Redliqueur,Australian redliqueurNot only世界Ranked number one, and only $30!

There are facts as proof!

World Association of Wine Writers and Journalists (WAWWJ) just releasedThe best red in the world in 2017liqueurAnd the bestliqueurZhuang's list.This oneThe list is redliqueurBoundary"Ultimate List", Because its ranking is based on each redliqueur和liqueurZhuang's awards globally.

The jury passed the whole世界More than 50,000liqueurZhuanghe 700,930 RedliqueurIn the last yearMore than 80 international redliqueurNumber of awards in the competitionBased on statistics, the 2017 Top 100 list is listed.

What’s more exciting is its price,Only $30! On Dan Murphy's website, the current discount is only $2015 for the 20.9 vintage, and the reviews are all well received.

In addition, in this "World Ranking of Wines and Spirits" list, several Australian companiesliqueurvillageWolf Blass, Jacob's Creek, McGuigan and Taylors Wines are all ranked among the top 20 in the world!

Leonardo Castellani, chairman of WAWWJ, said that Australia’sliqueurZhuang performed very well on this year's list!The most awarded in the world's top 100liqueurZhuangzhong, Australia occupies a total of 21!On the listliqueurThe number of villagers ranks fifth in the world!

Of course, this is no longer Australia RedliqueurFor the first time on the international stage, he won the top spot.

And its price is incredibly low,Only $6! 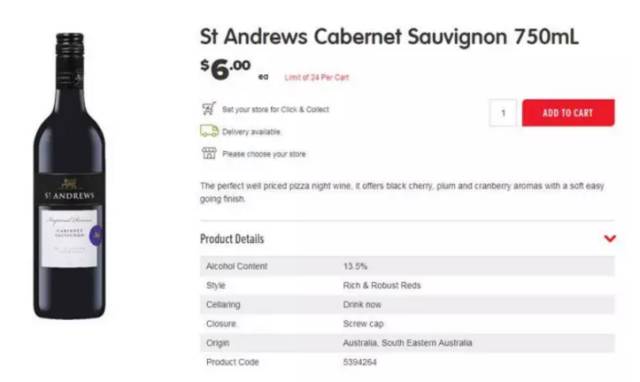 Same inThis oneIn the competition, the price of AldiOnly $6.99 redliqueurOne Road South Australian Heathcote ShirAZ 2015Also performed well, putting the "Best Value ShirAZ"In the category"Red of the Yearliqueur"(Wine Of The Year) award is in the bag.

So I like to drink redliqueurYou don’t have to spend a lot of money to buy well-known red from other countriesliqueurThe red of our Datuaoliqueur.qualityFirst class!It is definitely worth a try!

good news! In order to reduce the economic pressure of residents, the Victorian vehicle registration fee is newly set up to be paid in 3 months!

The City of Melbourne wants to introduce 20,000 refugees and get PR immediately! What do you think?