Residents across the state receive a missile attack alert! People ran away in panic, leaving last words to say goodbye to each other, only to realize that this was a false alarm

Leung Australia News 0 0
People across the state fled in panic!Schools are closed, shopping malls are closed, and all games are suspended. People hide in shelters, garages and even sewers, everyoneScreaming and crying, hugging tightly,Leave a last word,Say goodbye to the one you love...

This is not the plot of the movie, but the true reflection of yesterday when the residents of Hawaii received a missile attack warning.

They really thought,They are dying.

Unexpectedly, 40 minutes later, another message from the Hawaii Emergency Management Agency blew up all the residents...

Yesterday morning, on an ordinary Saturday, people living in Hawaii went surfing on the sea as usual, lying on the beach in the sun.
Jackie Calaizis, an Australian girl who is on vacation in Hawaii, is still asleep, and she has already planned her next trip. suddenly,Piercing alarmBroke thisAll peace! 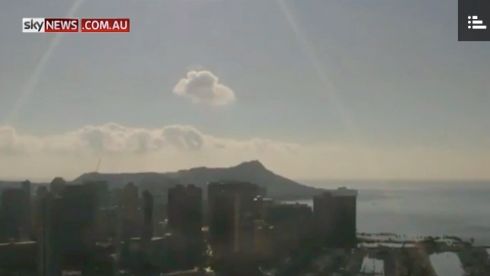 Jackie Calaizis was awakened by the constant alarm and knocks on the door! Mother shouted at the door: "Get on your clothes and shoes! Let's go to the shelter!"The missile is coming soon!" At 8:07 am local time, almost all people in Hawaii received an emergency alert issued by the Hawaii Emergency Management Agency: 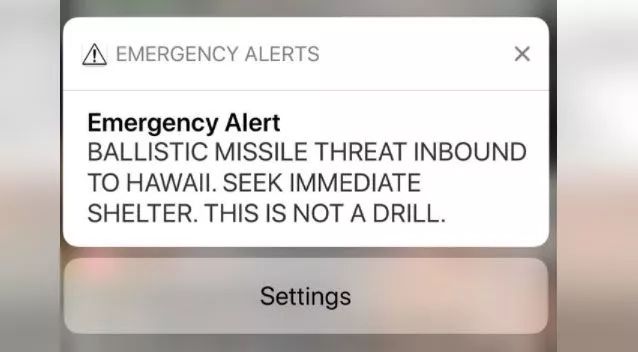 People have posted the information they received on social media: 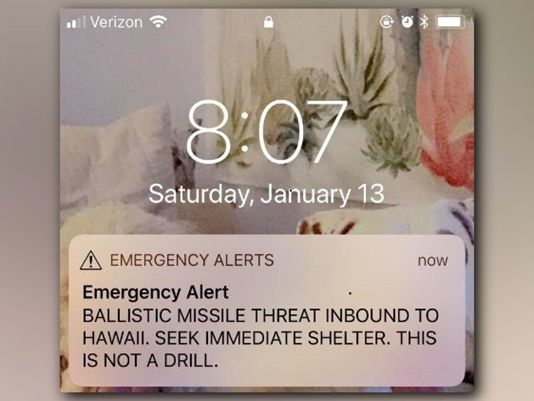 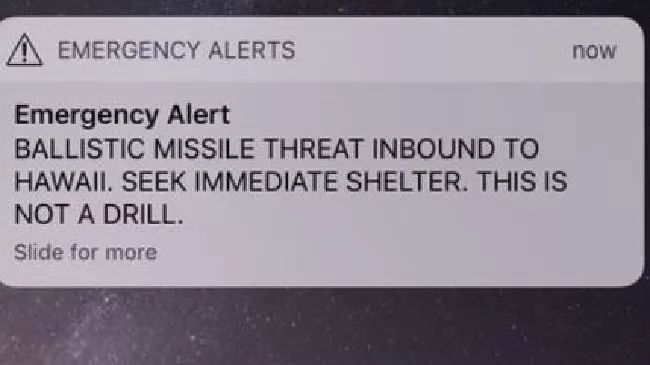 If you are outdoors, seek the building where you live immediately. Keep indoors away from windows. If you are driving, you can safely pull to the side of the road, look for shelter in a nearby building, or lie on the ground. We will announce when the threat has ended. "

The missile strikes, the originally beautiful city will be blown to the ground! This means,Many people will not survive,Facing death! Someone ran away quickly...schools closed, shopping malls closed,People ran away in panic...

For a time, as if the end of the world, the streets were everywhereThe running crowd.

People put down what they were holding and panicked. Holding his head in his hands, I don't know what to do.

They thinkI don’t have much time left, Do meaningful things.

Some of themRun to refuge, Just to get a chance;

Someone is hiding in the basement, garage

Apart from Run away, People will chooseHide.

Some familyHid in the basement and garage together, Hug together. Some families let their childrenHide in the sewer.

Someone bids farewell to the one they love, people scream and cry loudly, they didn’t expect, "The last moments of living in the world"It will come so soon. 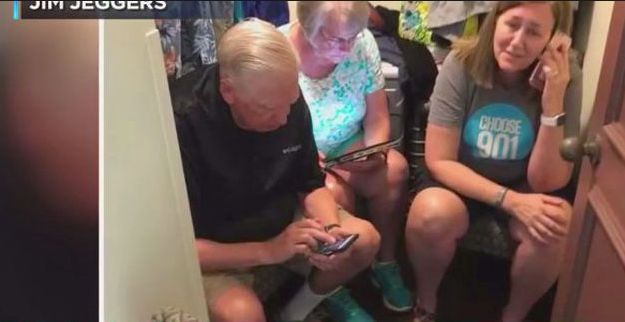 "People are crying and sending messages goodbye to their loved ones, and husbands do their best to protect their children."

Everyone panicked and faced a sudden disaster. Although people don't know if they will escape this disaster, they embrace each other and express their endless love.

Of course, there are some people who have already done itPreparation for death.

Hawaii State Representative Matt LoPresti said, "I was sitting in the bathtub with my child, we talked a lot, and finally we were praying..." Jamie Malapit, the owner of the barber shop, said that he sent text messages to all his customers,Canceled appointment, Closed the store door, tidy up everything,Waiting for the last moment.

and alsoOld man sitting in a chair on the beach, Seems to have already seen life and death, still basking in the sun leisurely,As if nothing happened. 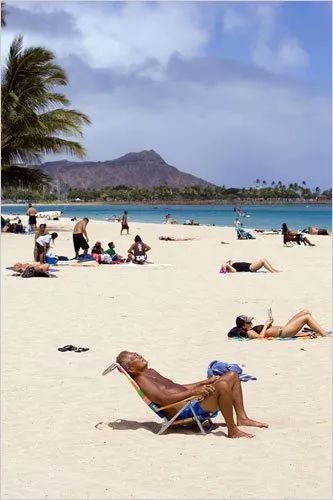 A false alarm, the alarm was sent by mistake

However, just when people clenched their hands and hugged together and waited for death; when residents drove away from this terrible city; when people were counting down to commemorate their lives,Another alert message is sent to people's mobile phones!After seeing the content, everyone almost exploded!
Emergency alert:No missile threatens the state of Hawaii.Say it again, before that wasFalse warning. It turns out that all this isFalse alarm, There is no missile at all, but onceHuman error!

It is reported that after receiving the alert,The Hawaiian military didn’t know what happened., Because they didn’t receive any hint of where to launch the missile. 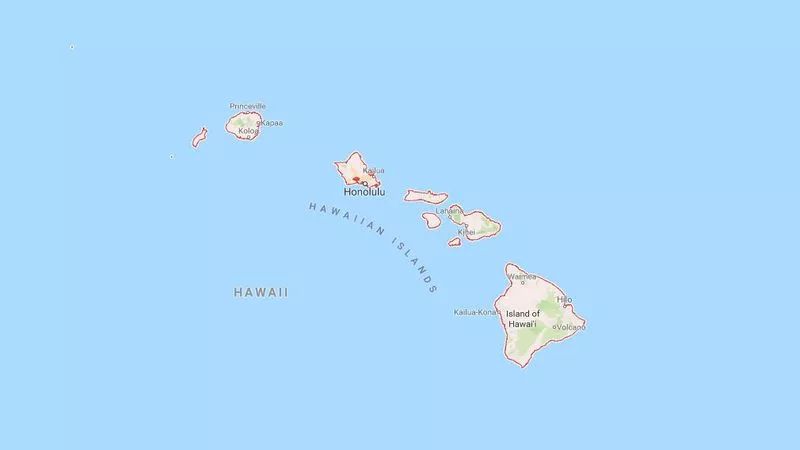 They contacted defense agencies including the U.S. Pentagon and Pacific Command for the first time, and monitored again. The answer was still:No ballistic missile threat to Hawaii was found! "This is a standard procedure in the shiftMistakes made,YesThe employee pressed the wrong button."

As a result, alarms were quickly issued through information channels such as television, radio, and mobile phones, causing people to panic. It is reported that when people received false alarms, they had already left to escape.Nearly 40 minutes!

And some people even stopped looking at their phones because they escaped, soI never received any more information about the alarm, Still fled the city in a panic.

Helpless, the Hawaiian official isVarious highway crossings, All have the message "alarm error, no threat". 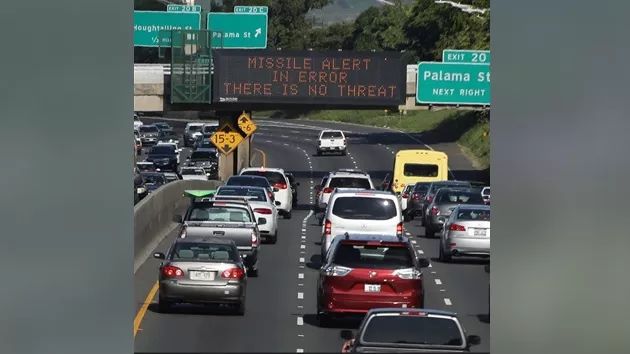 It’s unimaginable that such a big oolong incident happened in a state just because a person pressed the wrong key. This has become a "laughing stock" in the world.Australian media also reported on the matter.

"Daily Mail": "The whole state is in panic": The Hawaii Department of Civil Defense issued a missile threat warning, telling residents to seek asylum immediately, and 37 minutes later, it said that this was a false alarm. "9news": Hawaii issued a false missile warning and is under investigation

Subsequently, the Federal Communications Commission of the United States stated that it would definitely investigate this big oolong.But what kind of punishment the responsible person faces is still unclear.

After the oolong, the residents were furious and quarreled online

When the residents of Hawaii crawled out of various shelters and sewers, everyone stayed.The gray-headed faces looked at each other, not knowing whether to laugh or to be angry.

At this time, everyone who had experienced a panic and escaped finally came to a sense of relief:What a false alarm,Actually we areWas it played? !

The startled residents were angry:

The error message fermented for a full 37 minutes, and anyone who didn't watch Twitter didn't know it was a false alarm!

"We even thought about the last words to our dear ones!"

"I thought the world above the sewer was gone!"

"Come out and see a piece of An Ran thinking that he has entered heaven!" "Our whole family received the alarm and took the children into the toilet, begging for everything to pass quickly. It's scary!"

"I felt relieved after knowing it was false news. Otherwise, the last thing I did before leaving this world was to buy a movie ticket for one person alone..."

"The family is hiding in the garage. My mother and sister are crying. The alarm is fake, but our panic is real." "For 40 minutes, everyone thought we were going to die.I received a crit mentally, now I just want to say to everyone I love you."

"No words can express how excited we were when we learned that this was a false alarm! My girlfriend and family are in Hawaii, and the panic is real. Thank God..." A farce,The whole country is in panic.

This oolong soon spread to major media all over the world, which is also a shame.

"Did CNN start accusing Trump? If not, wait a few minutes."

"Who made such a big mistake? If he worked for me, he is gone now."

"It was a false alarm. Obviously someone is about to find a new job."

"It must be scary at the time."

"My son is in Hawaii, and he texts that he loves us. Silly boy, terrified me."

"Relevant agencies said this was a mistake. Well, we don't want to hear why this happened, but there are many aspects that need to be vigilant, and this is probably intentional."

This farce also makes people wonder what to say.

I felt sorry for the residents of Hawaii, but fortunately everyone was fine in the end.

The 37 minutes of life and death will probably give them a new understanding of life.

Great Ocean Road tourists don’t even want their lives for selfies! Going over the fence without authorization will be fined $159