When asked if the fourth phase of the city will be closed
Governor saidBlockade will not be upgraded yetEven if you upgrade, it won’t help...

Meanwhile, this morning (23rd)
It is the first day that Victoria has implemented a mandatory mask order
A reporter from Australia.net will also show you
Street shots in Melbourne!

01On the first day of the implementation of the Melbourne Mask Order, there are banning officers in many places! There are still people who are unwilling to cooperate with the conflict...
On the morning of the 23rd, the Australian reporter went out and started filming this historic day on Melbourne CBD Street.
At Melbourne's Central station, you can still see many people coming to the city by train. At first glance, everyone wears a mask. And outside the station,Several inspectors with masks were also deployed to observe whether anyone was wearing a mask. There are inspectors waiting outside Central Station Central shopping mall has set up a sign, requiring all people entering and leaving to wear masks
On the other side, close to RMIT, a reporter from Australia.com also encountered a large number of Victorian police gathered for a meeting to discuss today's patrol route. The policemen preparing to patrol are wearing masks

One of the policemen told a reporter from Australianet,They mainly control quarantined hotels in CBD, and also check whether the surrounding people are wearing masks, I also hope to remind all Victorian friends that you must wear a mask when you go out!
On the way from Central Station to Flinder Station along Swanston Street, although it is obvious that there are not as many people to work as usual, it is also very gratifying to see everyone wearing masks... At the same time, the Australian reporter also noticed that many restaurants, coffee shops, and supermarkets along the way,A new announcement has been posted, requiring all people who enter the store to buy and consume must wear a mask to enter.
Whether it's Coles... Or Woolies...
All posted the latest announcements But at the same time, the first day of the Victorian mask order
There must be black sheep who are unwilling to cooperate

When an Australian reporter was filming on the street,He just heard the male roar not far away, and immediately rushed to the scene to check what was going on. I saw the man in the ball cap in the photo,He scolded each other without wearing a mask and even beat each other with gestures.
The passers-by saw it and spoke out to discourageAnd began to seek assistance from the police
As a result, a tram stopped at this timeThe man jumped into the car and left

But considering that there are banners everywhere today,What is certain is that the man will never escape the fine. 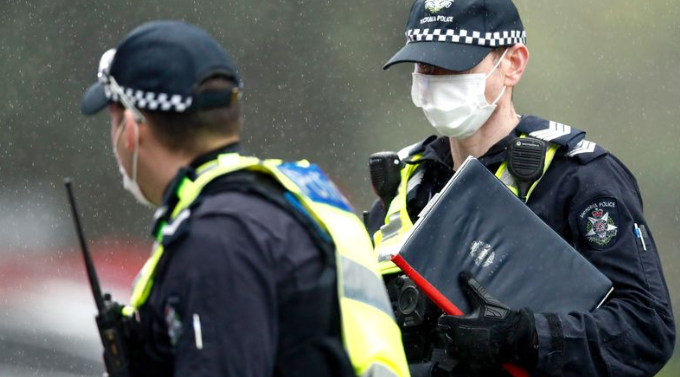 The Australian reporter also reminded everyone
Start going out today, don’t forget to wear a mask
At the same time caring for everyone around you
If someone can’t afford a mask,
Please help

02Anti-mask activists graffiti protest! Victorian police call on supermarkets to step up inspections and provide free masks...
After reading the mask order on the streets of Melbourne on the first day,Let's bring the topic back to the epidemic data. Today, there are 403 new cases in Victoria. From the second lockdown to the presentVictoria's epidemic numbers have been highCan mandatory wearing of masks effectively suppress infection?The next few days will prove everything.... However, the Victorian police said this morning that they still received some notifications that they were unwilling to wear masks. In particular, major supermarkets must strictly cooperate and even provide masks to customers. According to reports, between 7 am and 8 am on Thursday, two customers entered Woolworths in Fitzroy without wearing a mask.
But the manager of Woolworths did not stop the two men from entering the supermarket.They said they could not be sure whether the customer has a medical exemption.
One of the security guards, who asked not to be named, said: "All we can do is give them masks."
One of the men without a mask said that he is currently in a difficult situation and cannot afford to buy a mask.But another person said that he does not think masks are effective and that the danger of a pandemic is exaggerated.In the end, both of them rejected the free masks from Woolworths staff...
What is even more incredible is that there is a group of anti-mask protesters.Doodling to Federal Minister of Health Greg Hunt's voter office in southeast Melbourne... Protesters put masks on office windowsIt says "Don't" and "Unwilling"...
According to a report from News.com, an epidemiologist warned that if Victoria cannot control its COVID-19 outbreak,Then it may face isolation from the rest of the country for up to two years.

Professor Tony Blackley said in an interview with ABC on Wednesday yesterday that six of Australia’s eight territories have "accidentally" achieved zero.
But this also means that these areas may not open their borders to residents of Victoria or New South Wales until the latter can achieve the same goal.
Unless a vaccine comes out, or the state of Victoria is cleared, it may continue to be sealed... 03Summary
The mandatory mask order has finally come into effect. Today’s Australian net reporters observed on the spot that the majority of people who cooperated are still in the majority. Regardless of whether local Australians or Chinese are wearing masks, this is really gratifying. I want to say that if this continues, victory is in sight.
But in the face of those who do not understand, I also hope that you will be brave enough to report complaints. At the moment of the epidemic, whether Victoria can avoid the fourth stage, and even suppress the epidemic, depends on your and my efforts!

Australia folds: Melbourne, which has been closed for the second time, ruthlessly exposes the world's difference between the two worlds