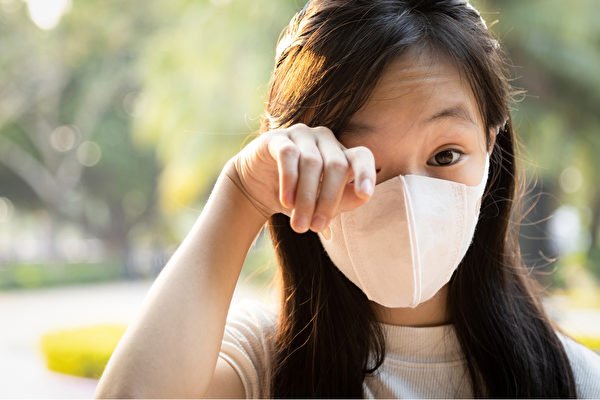 My child's eyelids are red and swollen. What causes it and how to deal with it? (Shutterstock)
The child's eyelids (eyelids) suddenly became red and swollen, as if they had developed an acne, which still persisted after two days. What caused this? Grandma said this is longeye of a needle, Mom said it was a mosquito bite...what should I do? Do I need to see a doctor right away?

Red and swollen eyelids There may be four major problemsone,Sty(eye of a needle）

StyCommonly known as needle eye, it is a phenomenon in which the sebaceous glands under the eyelids are infected by bacteria, which causes redness and pustules on the edges of the eyelashes.
The needle eye is divided into the inside and outside, which are caused by different sebaceous glands being blocked and infected. However, if the needle eye is on the inside of the eyelid, it is not easy to be found. At the beginning, the child will feel discomfort and pain in the eyelids, redness and swelling and small yellow pointed heads, which look like pimples. Afterwards, the eyes will have foreign body sensation, itching and tearing, and some people may be sensitive to light.

Stye is commonly known as needle eye, which is a phenomenon in which the sebaceous glands under the eyelids are infected by bacteria, which causes redness and pustules on the edges of the eyelashes. (Shutterstock)
Why do children have needle eyes? The main reason is that you often rub your eyes with dirty hands to allow bacteria to enter the sebaceous glands. Some children with sensitive skin, such as seborrheic dermatitis, are prone to needles.
How to deal with the needle eye? Parents can try to apply a clean towel or paper towel to the child's eyelids, 5 to 10 minutes a day, 3 to 5 times a day, it can promote the flow of blocked sebaceous glands to reduce inflammation and swelling. You can also massage the lumps gently while applying heat to help reduce swelling.
Needle eye is not a dangerous disease. Most of them will disappear slowly after a few days or one or two weeks without special treatment. However, most parents cannot distinguish the cause of the redness and swelling of the eyelids, and it is recommended to ask a doctor to diagnose whether it is just a needle eye.

Very similar to the eye of a needleRed and swollen eyelids, IsChalazion. The symptoms are also pimples-like bumps on the eyelids. Unlike the eye of a needle, chalazion is a chronic sebaceous gland inflammation, which is not painful and is not as swollen and red as the eye of a needle.
Chalazion is not a dangerous disease, but it takes a long time to go away, sometimes several weeks to several months. If you do not return for a long time, you can see an ophthalmologist for further examination to see if it needs to be removed. Sometimes, when the needle eye recovers, it will become a chronic chalazion, so if parents find that the baby's eyelid redness has disappeared, but there is still a small particle-like lump, it may become a chalazion. But don't care too much, because most of them will slowly disappear.

Even ordinary needle eyes may cause complications, such as "periorbital cellulitis" caused by bacterial infection of the eyelid skin tissue, namely the eyelid (eyelid)fever.
Inflammation of the eyelids can cause abnormal redness and pain on the eyelids. The difference between it and pinhole and chalazion is that no acne-like swelling will be found on the edge of eyelashes or in the inner conjunctiva.
Inflammation of the eyelids must be treated immediately by a doctor. Generally, the swelling will gradually disappear within 1 to 2 days after taking anti-inflammatory drugs. If the swelling has not disappeared, you must return to the clinic immediately to confirm whether it is dangerous "orbital cellulitis", that is, bacterial infections are not limited to "peripheral cells" ", but caused inflammation of the soft tissue behind the eye socket. If so, you must be hospitalized immediately, otherwise it will cause blindness and even life-threatening.

Of course, in addition to the more common factors that cause red and swollen eyelids in children, the most common one is naturally red and swollen caused by mosquito bites. Sometimes when a child rubs the eyelid after a mosquito bite, the entire eyelid will become red and swollen, or even cracked, causing the eyelid to become irritated and need to take anti-inflammatory drugs. If it is a simple mosquito bite, parents only need to relieve the itching of the child, such as oral anti-itch medicine or cold compress on the bite. ◇

About the author: Dr. Huang Yanpi

[Emergency] The White House requests the immediate execution of the WeChat ban: the deadline is October 10st