The Australians were completely angry and 27 petitioned!Discriminate against the Chinese and incite anti-Chinese, and the black hand behind it is caught! "He is a cancer in Australia"!

In the past two days, a big news happened in Australia!
Former Australian Prime Minister Kevin Rudd initiated a petition on the parliamentary website, In just a few days,
More than 27 people signed a petition!
The Australian parliamentary website's traffic soared by 500% due to this joint activity, and it was even paralyzed for a while.
Speaking of it, some of my friends may not understand how capital bosses operate democratic politics through the media.

The basic routine is: first publicize the freedom of speech in the news media (the essence is to spread rumors as I want), and then the media frantically brainwash the masses who have no ability to distinguish right from wrong, so as to achieve the purpose of controlling public opinion, and finally achieve it with the excuse of respecting public opinion Own political goals.
Kevin Rudd said why Australia is inseparable from China in terms of economic interests,
But still doing a lot of things that are contrary to the national interests?

This is a mutually beneficial partner,
Why are the Australian media always keen onBlackening China, Chinese people, To incite anti-Chinese sentiment among the people?

Over the past 10 years, repeated "coups", 7 prime ministers, betrayed, forced the palace, retaliated,
Let Australia's political arena become an endless hellish cycle.
All of this,In fact, they are all related to one person!

01
A man who can call the wind and rain in Australia!
I believe you all remember,
How did some Australian media incite anti-Chinese sentiments at the beginning of the epidemic?

Another mainstream Melbourne media "Herald Sun" is in a prominent position,
Directly use "Chinese Virus" to refer to the new coronavirus! "The Australian" used "China Virus" to do things naked and incite hatred.

The above media,
"Daily Telegraph", "Herald Sun", "The Australian" are all 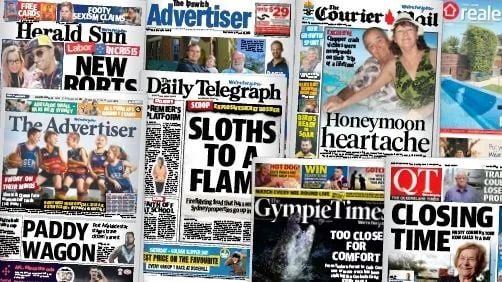 And the boss behind this news corporation,
It is Murdoch, a supporter of Trump and the right-wing media tycoon of the U.S. Republican Party. Rudd believes that Murdoch has become a cancer tumor of Australian democracy! The News Corporation he owns is not just a media organization,

It is operating like a political party in Australia!

Not only can it easily promote the abolition of Australia’s carbon tax, it can also make Murdoch
I don’t like any Prime Minister to step down.
For example, Australian Prime Minister Tan Bao, who stepped down before,

Rudd revealed that Murdoch refused to acknowledge that the global climate is warming, while former Prime Minister Tan Bao is actively promoting the Australian Energy Guarantee Program (NEG) and energy saving and emission reduction targets. This is obviously against Murdoch!

So, a few weeks ago, Murdoch came to Australia and called the editors of its media...
The next day, every News Corporation media began to attack Tan Bao frantically! (Each of the papers turned feral)

The facts seem to be the same as Rudd said. According to Andrew Bolt, a columnist under News Corporation,
The Liberal Party should "united against Tan Bao's stupid policies-He actually believes that the world is warming.".

Another columnist declared on the eve of the coup that Tan Bao had been resigned and Dutton was ready to challenge him.

The TV station under News Corporation is not idle either.
In the daily political program, they frequently connect with guests from all walks of life and repeatedly Diss Tan Bao... Even when Tan Bao has promised to hold a party caucus meeting at noon on Friday and resign,
On Friday morning, News Corporation still printed the front page of such a newspaper...
"crazy""The Liberal Party has abandoned the Prime Minister,But Tan Bao refused to leave"

So, what exactly is Tan Bao doing?
In fact, in the hearts of the Australian people, he is considered a good prime minister.
Before the coup d'etat in the party, he had been ahead of his rival, the leader of the Labor Party, Xiao Teng in the polls.
In the Liberal Party, his popular support rate is also far ahead of the coup initiator Peter Dutton and Scott Morrison, who eventually took over the prime minister.

Such a democratically elected prime minister is still popular among the people.
However, News Corp. was able to operate through the media and repeatedly create momentum to make him become rebellious and detached, and finally became cool...

Murdoch’s power,It's terrible!
In April this year, Tan Bao also revealed in his memoirs
Those who don't know the inside story of Australian politics!

"News Corp operates like a political party, working closely with right-wing politicians to influence Australian policy and Australian elections.Ruthlessly destroy politicians who are unwilling to cooperate with the Murdoch family.

"I don't work with Murdoch or News Corp editors to manage my government. I know [News Corp.] is extremely dissatisfied."

"If you do the opposite of News Corporation, it will attack you frantically. If you are with it, it will try to protect you.News Corp.’s protection of Morrison is the same as it’s protection of Albert in the past, to the point where it turns a blind eye to accountability for major issues..

News Corporation’s media is"Trump's most fanatical defender" and "the most active promoter of Brexit". "The U.S. has become a divided and conservative country today, and the media of News Corporation, including Fox News, need to bear great responsibilities."

The population of Australia is too small, only 2500 million people, not as many as Beijing.
However, the number of Australian media is very large. In addition to state-run news organizations such as ABC and SBS, there are also national TV channels such as 7,9,10, and SkyNews. In addition, each major city has its own newspapers, and even tens of thousands of people. Thousands of Suburbs have their own media!

In such a highly concentrated market, competition is fierce, and therefore only those who are very rich and powerful can play around.

And Murdoch is one of the richest people.

The News Corporation he founded currently has total assets of $145 billion!
Foreign media Quartz says Murdoch controls Australia12 of the 8 most important media, And fully controlled its online and offline distribution and reporting.
This means that nearly 65% ​​of the people in Australia are covered by it. This number,
It is 3 times that of its biggest competitor!

(Some media under News Corporation)
Foreign media Quartz said that in the past 40 years, Murdoch has always used Australia as a testing ground for him to manipulate public opinion and influence politics, and the Australian people are his guinea pigs!
If you don’t agree, change the prime minister. For Murdoch,It's a commonplace meal...
In 1975, Australia's then prime minister was the left-leaning Labour Party leader Whitland.Wheatland not only established diplomatic relations with China, but also withdrew from the Vietnam War.He gave free college admissions to qualified students, provided welfare subsidies to single-parent families and homeless people, abolished the death penalty, ended the racist White Australia policy, and appointed more women to government positions...
It can be said that Wheatland created the prototype of today's inclusive and open Australia. (Whitland visited China in the 70s)
However, the Sydney Morning Herald said that it was such a prime minister, but Murdoch became more unhappy as he looked at it.
So he sent a telegram to his editors:
"Kill Whitland"
(Kill Whitlam) You can take a look at the following two pictures:
This is the cover prepared by News Corp. for Rudd
"Finally, you have a chance to kick this thug out" This is the cover for Albert
"Australia Needs Tony" Murdoch worshipped Lenin when he was young, and perhaps he also dreamed of building a huge empire.

It seems that he is not too far away from this goal.

His media group has long become a huge empire, pervasive and ubiquitous, not only can easily influence every Australian prime minister, but also extend beyond Australia...
Trump’s election is recognized as inseparable from Murdoch’s Fox News. After all, they are both white conservatives... Now, Trump is almost touted as the savior of Fox News... Murdoch can even change the destiny of a country.
Many newspapers under News Corporation, such as The Sun, repeatedly advocated the disadvantages of staying in the EU and incited the British people to support Brexit. As you can see, the British really chose to leave the EU in the referendum.
Rudd alleged that Murdoch’s newspaper should bear important responsibility for Brexit. 04
What exactly does Murdoch want to do?

Murdoch’s father was originally a reporter for a local newspaper in Melbourne. At the age of 21, Murdoch’s father passed away. Subsequently, he took over the tabloid that his father had just bought.
Because of his talent for sensitive tabloid news, he quickly made a fortune, not only expanded the industry to all of Australia, but also entered Europe and the United States, and became a giant in the international press. It is worth mentioning that, as US law stipulates that non-US citizens are not allowed to own newspapers and TV stations at the same time, Murdoch became American citizenship in 1985 and gave up his Australian citizenship. Murdoch’s identity issue also raised questions from netizens.
Some netizens said: "A'American' can hold more than 60% of the media in Australia... Can he represent 100% of Australia's interests in law? In 2018, Australia introduced the "Foreigner Intervention Act"... Does Doc's News Corp need to register?"

The industry recognizes that Murdoch is ruthless and unscrupulous in doing things.
In order to obtain first-hand news, he even allowed his subordinates to monitor the mobile phones of senior government officials, politicians and even members of the royal family.
A reporter once asked Murdoch,
"Your business empire is all-encompassing, what is your favorite thing?" Murdoch’s answer was: "Planning and reporting with newspaper editors...influencing humanity"
Perhaps this is what Murdoch cares most about.
Control a country, not enough!
Affect mankind,
That's what he wants to do!
Editor: Haha sister, Fred

Australian Food Encyclopedia | Unpopular Fruit and Vegetable Literacy!After reading this article, you will become a small supermarket in seconds~

Australia, 6 new cases!Melbourne is about to be cleared, but the mysterious case of Box Hill, a Chinese gathering area, has become the biggest problem!Australian officials announced the new policy of opening up the border, and international students are given priority!