The Australian brother passed by the beach and saw an unforgettable scene of his life, 8 people are being swallowed alive!He rushed into the sea like crazy...

Sydney is the city with the most beaches in the world,Going to the beach is a favorite leisure way for Sydneysiders.

The recent days of high temperatures have made people living in Sydney unable to bear the desire to go to the beach and enjoy themselves.yesterday afternoon,The most lively beach in Sydney: Bondi, Bronte, and Coogee are crowded with Sydneysiders who spend the hot summer.

At sunset, the beautiful men and women who came to sunbathe and show their bodies all packed their things and got ready to go home. The people on Bronte beach began to leave one after another.

suddenly
A big brother rushed out from the roadside
While shouting, rush into the sea!

The tourists on the beach did not realize what happened.I saw this tall little brother throwing down his backpack while running and swimming towards a few people in the sea.

There were more than a dozen people swimming in the sea at that time
No one noticed anything unusual
Little Sydney rushed into the sea, dragged one of the girls back to the shore, and handed it to another stranger who was swimming.Then turned around and rushed back into the sea, swimming desperately to another person!
At this moment, someone nearby seems to understand the situation
Rush over to help
Two strange men cooperated with the little brother, dragging people back from the sea one after another...

Several young people who were packing up saw this scene. Although they were confused, they felt that the situation was urgent and they all rushed to help!

With everyone's help
The little brother rescued 8 people from the sea! "I saw 8 of themBeing swallowed by the sea"

When people were dragged out of the sea one by one, everyone found out,These 8 young people are dying!But just a few minutes ago, no one found that so many people almost drowned!

This superhero who suddenly rushed out of the gods is called Anthony Carroll, nicknamed "Harries", and is a very famous lifeguard at Bondi Beach!

Not only because of his enviable and strong figure, but also because of his rich experience, he has a pair of piercing eyes and can see the dangers that are happening on the beach at a glance.

He has rescued people from dangerous seas countless times These 8 people are simply luckier than winning the jackpot!
Because yesterday Anthony did not work as a lifeguard on the beach, but taught yoga classes at a gym near Bronte Beach.At that time, he had just left work and was walking on his way home.
When passing the beach
He habitually checks the situation of the beach in front of him 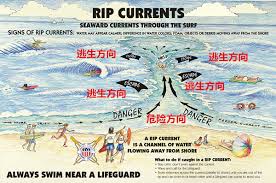 Just by this glance, he saw a terrible scene!
There are offshore streams!
Several people are being swallowed into the sea by offshore streams!
Someone has been rolled over, head buried in the sea!
Some people are buried under water!
The people on the beach didn't even notice it!
This offshore current formed suddenly, the light was also dim, and the lifeguards on the scene had already left work.If it hadn't been for his twenty years of beach rescue experience, most people would never have noticed it.
Too late to call for help
After a second, people will be swallowed by the sea!
So he ignored his hungry body just after work, dropped his backpack and rushed into the sea.
He shouted hoarsely
To get the attention of others
More than one person involved in the offshore stream
He cannot complete this rescue alone
Anthony, who has been playing at the beach since he was young, and has worked at the beach for 23 years, is no stranger to offshore streams.Rich experience allowed him to figure out the rescue plan and order in the shortest time!
But nevertheless
When he was going to save the fifth man
Already a little powerless
Almost bet his own life
Fortunately, there are also a few younger brothers with rescue experience on the beach. When they realized the danger, twoBesides, he rushed into the sea to help Anthony save others.These young people who had encountered offshore streams were rushed to the hospital and escaped their lives.
If Anthony comes one minute late
If no one else rushed to help
Today’s news will be a complete tragedy
Fortunately, there are so many brave and strong unknown heroes in this city.These 8 playful young people have encountered the luck of misfortune in life,
There are so many strangers
Willing to go all out to save them
But Anthony has something to say:

"In front of the sea, never be too confident"

Having been a lifeguard on the beach for 23 years, Anthony has experienced too many moments of life and death. He has rescued countless people from the edge of drowning. He has also watched his colleagues deliver their lives to save others. .He wants to say to everyone who likes the sea:

It's impossible that someone will come to rescue you at a critical moment
In front of the sea, never be too confident

He told everyone,Because of the frequent offshore currents, Bronte Beach is one of the most dangerous beaches in Australia.There will be special safety zone signs and there will be lifeguards on duty. Any situation outside of the safe zone or there is no lifeguard on duty is at risk.

Bronte beach lifeguard patrol time
8am-6pm
And these 8 young people are still playing in the water after 6pm...
Many people are confident in their water and physical strength,The understanding of the sea is very superficial,So I always don't care about these risks, and as a result, I get an accident, which not only ruins my own life, but may also hurt the people who saved them.

He wanted to remind everyone that there is no absolutely safe beach.Even Bondi Beach, the liveliest beach in Sydney, often has accidents.

No one understands the terrible sea better than a lifeguard!

What everyone in Sydney should know"Offshore Stream"

Offshore current is called (RIP Current) in English.Everyone knows that after the waves hit the coast, they will return to the sea.However, sometimes, due to various complex reasons such as terrain and weather, these waves that are ready to return to the sea are layered together, and then form a huge current.
This stream of water goes straight to the depths of the sea
If you accidentally enter this current

Then they will be dragged into the sea desperately
There is no way to parry!

Due to the many and complex factors that form offshore currents, there is no way to predict and judge.

Any beach, any weather
There may be offshore currents!
And offshore flow is unpredictable, even an experienced beach lifeguard,There is no way to warn you in advance that offshore currents may occur.

Unlike many dangerous marine creatures, offshore currents are the killers right in front of us!

Even if you just play on the shore
It may also be taken away by offshore currents!
Because many offshore currents start to accumulate power from the beach, this power will continuously push you into the depths of the sea!and so,If you are playing on the beach, you may be sucked in accidentally!

The most terrifying thing about offshore streams is that they come silently!Regarding the big winds and waves, everyone may have one more thought,However, where there are often offshore currents, there will be abnormally calm waves, making you not at all vigilant!

Look at the place pointed by the white arrow in the picture below, which is the offshore stream!
Most people would think this piece of sea water is safe!
But once you swim in it will be miserable!
The biggest feature of offshore currents is calmness!
Generally speaking, the waves that hit the beach are connected in a line. If you see that there is a sudden calm in this wave, then you have to be careful!
This is most likely an offshore stream!
It will quickly drag you into the deep sea!
Stay away!

What to do if you encounter offshore currents

Regardless of whether there is a warning sign on the beach to be careful of offshore streams, you must be more mindful!As mentioned earlier, if you see that kind of calm zone in the waves, you must stay away! 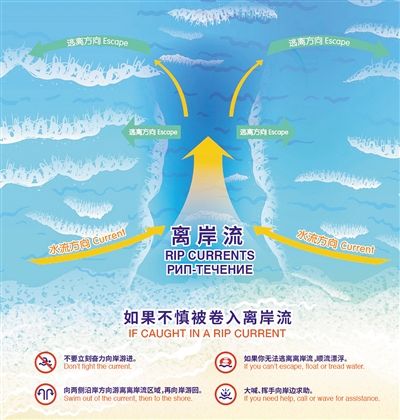 That is the most terrifying abyss!

If you are unfortunately caught in an offshore stream, don't look back!Because human survival instinct will make you want to flop back to the shore! The offshore stream is too scary, I hope everyone will never encounter it!But the weather is unpredictable, soBe sure to warn yourself and your family and friends to observe the surrounding situation more and be more careful!

Rape = death penalty!As soon as the legislation was enacted, this country sentenced several rapists to death!Happy!