The funeral of the hit Chinese food delivery man was held, and the widow was exempt from arriving in Australia to attend!He cried, "May I pull his hand?"

I have imagined reuniting with her husband in Australia for countless times. Ms. Wei never imagined that the first time she stepped into this strange country, she actually attended his funeral. Last month, Chinese food deliveryman Chen Xiaojun was hit and killed in Sydney's Zetland district.When the news spread, it happened to be the Mid-Autumn Festival. While the community was in sympathy, many people offered a helping hand.

With the help of kind people, the widow, Ms. Wei, was granted an exemption from entering Australia a few days ago to take care of her husband's funeral affairs.

"Wake up!" At the funeral, Ms. Wei wailed several times, but she could not accept this cruel fact. Two hours before the start of the funeral, Xiaojun’s workers and fellow villagers were already waiting outside the funeral home, and they also brought a set of his clothes.

Roommate Liu told reporters that these clothes will be cremated with the remains. "He was on the hospital bed when he died, without clothes." They hope Xiaojun walks decently. 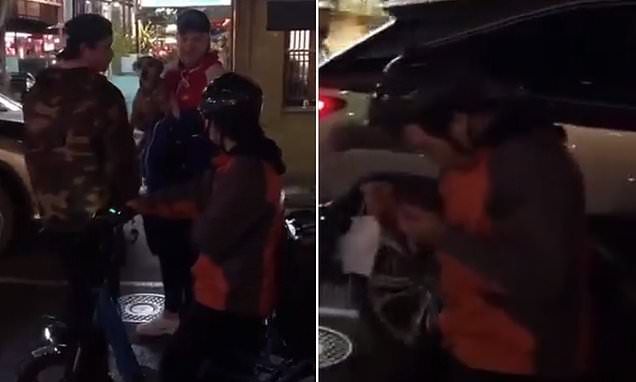 Due to the complicated quarantine exemption procedures, it was nearly 12 o'clock when Ms. Wei arrived.Although the face mask covered his face, his hair was messy, his eyes were red and swollen, and it was hard to hide his fatigue.When she saw her husband's body, she couldn't help crying on the spot, "You wake up!"

He rushed forward several times, choked up and said to the staff, "Can I pull his hand?"

After feeling a little stable, Ms. Wei gave a speech and thanked everyone who helped their family. Ms. Wei arrived in Sydney on the morning of the 16th. After getting off the plane, she went to a hotel in the city center and began a 14-day quarantine life.

With three meals a day, she can hardly eat anything, and she has very little sleep. “Only at 4 o'clock in the morning can she sleep for a while with medicine.” When she woke up, looking at the photos and videos of her husband before her death, she still could not accept the fact that her husband had passed away. Xiaojun and a pair of children (photo source: courtesy)

Originally, Xiaojun planned to return to China next year to accompany his daughter who is about to get a third grade to prepare for the college entrance examination, and wait for her daughter to go to university before making other plans.

Even the couple had discussed that they would send their children to Australia to study when they saved enough money.

But all of this is now an unattainable dream.

Call for questionsWhat doubts have you encountered while living in Australia, or do you know how to solve it?Now you can send us these questions, and we will invite professionals to help you answer them on the new platform that will be launched soon, so stay tuned!

Distressed!Just because of this, all 9 members of the family were poisoned and died! 99% liver necrosis!Attention Chinese Australians!Do not eat these foods again!

It's a purchasing agent again!Two Australian thieves were arrested and found thousands of cans of milk powder and health products!The stolen goods were too much to be shipped, so the police rented a van specially...