write an essay
Release your eyes, put on headphones, and listen~!
Victoria has double zero for 7 consecutive days!!
Active cases dropped to 20 cases,

It will be further unblocked on Sunday! Australia has signed two more vaccine subscription contracts,
From next week,
3000 million Oxford new crown vaccines will be produced in Melbourne,
Australia has invested 32 billion in vaccines,
1.34 million vaccines are vaccinated for free! Australian media reported,
China may refuse to import Australian wheat,
There will also be restrictions on six other popular Australian exports. The spokesperson of the Chinese Ministry of Foreign Affairs responded:
I hope Australia will push the relationship between China and Australia back on track!
01
Victoria has double zeros for 7 consecutive days!The official announcement will be released on Sunday!These restrictions may be lifted! !
The current epidemic prevention situation in Victoria is very good. For 7 consecutive days, there have been "double zeros" without new and death cases. The number of active cases has dropped to 20. At present, all active cases are concentrated in the Melbourne area.

As the Victorian epidemic continues to be brought under control, the governor also stated that he will announce further unblocking on Sunday.Many experts discussed the unblocked content this time.

Australian media Herald Sun also made a special report and predicted the unblocking. It is generally believed that the following restrictions will be lifted.
1: The mask ban may be relaxed
The mask ban is the focus of Chinese people’s attention. Masks have made a great contribution to epidemic prevention. However, as the Victorian epidemic is brought under control, some people have begun to callLifting the mandatory wearing order of masks.
The attitude of some experts is that the number of confirmed cases in Victoria has dropped to a very low level. The actual effect of requiring people to wear masks when going out is far less than before, and as the temperature rises, wearing masks is easy to sweat. Sweat protection will also be greatly reduced.

Another part of the experts believes that the relaxation of the mask ban is not in a hurry. This restriction is more suitable for lifting in the next stage. There will be no need to wear masks outdoors, but masks are still required for public transportation, crowded areas and places where social distance cannot be maintained.

Based on the attitude of experts, the mask ban will be lifted, but not this Sunday.The problem is that even if there are zero new additions in Victoria, there is no guarantee that no virus carriers will exist.If the most basic protection of masks is lost, the hidden danger of virus transmission still exists.
2: Limit on the number of family visitors
Experts believe that with the current situation in Victoria, the limit on the number of family visitors will be further relaxed.It is expected that the indoor limit will be increased to 20 people.
3: The cinema may reopen
Expert's suggestion: The cinema can be reopened, but the number of moviegoers will be limited and masks will be mandatory.
4: 25 km limit or lift
The current distance from home is 25 kilometers, and there is a high probability that Victoria will lift this restriction next week.As the weather gets warmer, people go out more and more frequently. If the restrictions cannot be lifted, the limited beaches will gather a large number of people, which is not good for epidemic prevention.The Victorian government also stated that while lifting the 25-kilometer limit, it may also open up remote areas for travel. The above are the restrictions that Victoria may further lift next week, but the analysis content comes from the predictions of Australian experts, and the specific information is subject to the press conference on Sunday. 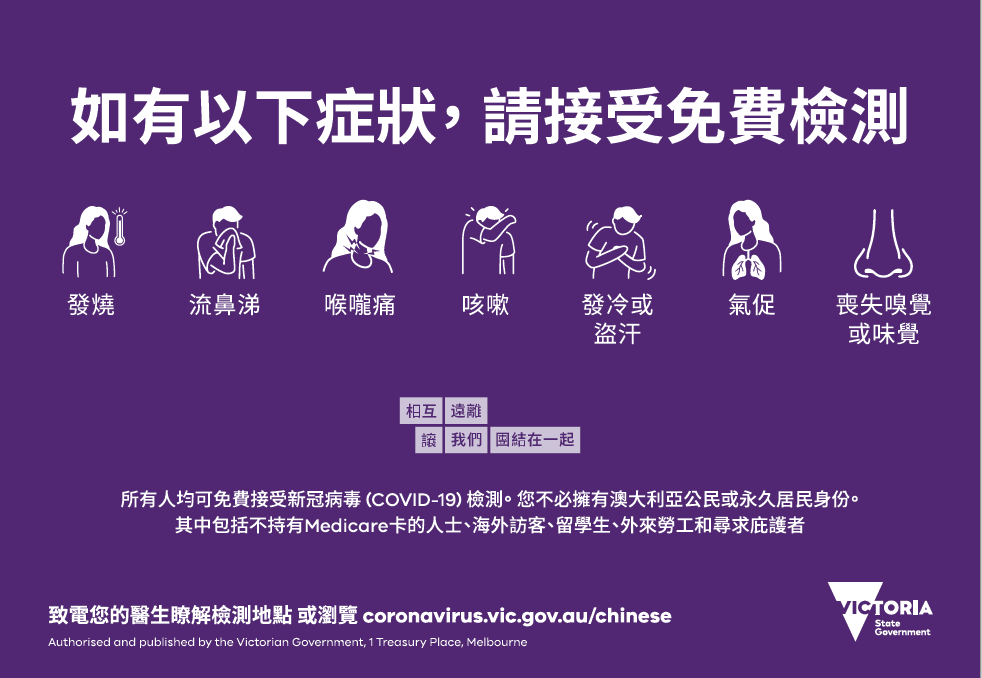 Australian Prime Minister Morrison signed another two new crown vaccine orders.
Among them, 4000 million vaccines come from Novavax, USA, and another 1000 million vaccines come from the joint production of Pfizer and BioNTech.
Morrison also announced a bigger piece of good news:Melbourne will start production of the new crown vaccine jointly developed by Oxford-AstraZeneca next week. Morrison also said that with local production and overseas orders, Australia's total investment in vaccines is 32 billion Australian dollars, and the total number of vaccine orders is 1.34 million.The Federal Ministry of Health issued an announcement stating that Australians will not be forced to vaccinate and individuals will reserve the right not to vaccinate.Those who choose to vaccinate will get the vaccine for free.

With the new crown vaccine, border restrictions will no longer exist, national borders can be opened, and all restrictive policies will be lifted.Australia's economic and social order can be fully back on track.

03
Australian media reported: China may refuse to import Australian wheat!There will be 7 popular Australian export commodities that will be restricted...

According to weeklytimes reports:As Australia-China relations continue to deteriorate, China may prohibit state-owned and private companies from importing Australian wheat.

The report said: China has notified state-owned and private companies to suspend trading with Australian wheat exporters.Even if Australian exporters try to ship goods to China through a third country, they will not be allowed to clear customs. Combined with the barley that has been subject to tariffs before, Australia's two major agricultural products have been restricted.

And this is not all.According to Financial Reviews:Chinese official media wrote an article that may impose restrictions on Australia's seven popular export products.

Financial Reviews analysis: The total value of these export commodities is as high as 60 billion.Because there is no exact information, it is still uncertain whether these commodities will really be refused customs clearance.

In response to this matter, Australian Foreign Minister Marise Payne said that he is working hard to negotiate trade issues with China, and expressed his stance: I hope China can abide by trade rules and not impose restrictions on Australian exports.

04
The spokesperson of the Chinese Ministry of Foreign Affairs responded: I hope Australia can push the relationship between the two countries back on track...

In response to the remarks of the Australian Foreign Minister Marise Payne and the media inquiring about the obstruction of Australian lobster customs clearance and other issues.Chinese Foreign Ministry spokesperson Wang Wenbin responded.

Wang Wenbin said: "China Customs implements inspection and quarantine on imported seafood at the import port in accordance with the law. This is not only to implement the requirements of relevant national laws and regulations, but also to ensure the safety of Chinese imported consumers."

Wang Wenbin also confirmed that China has suspended imports of logs from Kunzhou. "Chinese customs have repeatedly detected live quarantine forest pests such as longhorn beetles and giddings in logs imported from Australia. Once these pests are introduced, they will pose a serious threat to China's forestry production and ecological security." Wang Wenbin also said: China has always insisted on developing friendly and cooperative relations with other countries on the basis of mutual respect, equality and mutual benefit.We always believe that a healthy and stable China-Australia relationship is in the fundamental interests of the two peoples.At the same time, mutual respect is the basis and guarantee for pragmatic cooperation between countries.It is hoped that Australia will do more things that are conducive to mutual trust and cooperation between China and Australia and that are in line with the spirit of China-Australia comprehensive strategic partnership, so as to bring China-Australia relations back to the right track at an early date. The issue of China-Australia relations, if this Friday, Australia really has 7 popular export commodities restricted, it will be a huge blow to Australia's trade.
Australia has achieved the current results of epidemic prevention. It was originally hoped that the economy can be restored quickly, but the trade blockage will have a significant impact on the economic recovery.
I hope that the relationship between the two countries can be eased, trade resumes, and Australia's economic development is also excellent news for local Chinese.
05
Summary
Victoria has "double zero" for 7 consecutive days and has met the conditions for further unblocking.For specific restrictions that will be lifted, we can look forward to the press conference hosted by the governor on Sunday.
Compared with other countries, Australia has obvious advantages. The independent island country is about to enter the summer, creating unique conditions for Australia's epidemic prevention.The production of vaccines also gives people hope.In the future, the blockade restrictions between Victoria and the states will gradually be eliminated, Victorians can travel to other areas, and tourism will restart.
Regarding the mask ban, some reservations are still needed. Wearing a mask is one of the most effective ways to prevent the spread of the new crown virus. Even if the government relaxes this restriction, I hope everyone can consciously maintain it.

The total number of confirmed cases in Australia:27634

Want to smoke? Save money first! Up to $758 fine for lighting a cigarette in front of a Melbourne restaurant‏